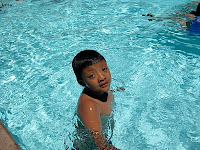 Well, it happened. The thing that I've been dreading for almost four years happened yesterday on a lovely, end of the summer evening with friends. We had been invited to a barbeque at a nearby neighborhood swim club that our friends belong to. It was Friday of Labor day weekend. Did we want to bring the kids over for a swim and a potluck dinner? Actually, yes! It is difficult for our family to socialize together with other families because of the Joshua factor. Barbequing at a pool is a perfect setting to give it a try. Swimming is one of the things that all of our kids, including Josh, love to do. The adults might even get some conversation in over a glass of wine while grilling some bacon wrapped pork chops.

It began as an unbelievably lovely time. The day had been relaxingly, but not exhaustingly, warm. All of the kids were having a great time in the pool. There were two lifeguards on duty and, because it was later in the day, we were the only people at the rather large pool. I was able to relax and not be as vigilant about watching the kids constantly. I did keep an eye on them but I was also enjoying chatting with my friend. I was amazed at how all of my kids have really grown in their swim skills over the summer. Joshua, as usual, was thrilled by the sensory stimulation of the water. He was all smiles and laughter, playing by himself in the shallow end.

Dinner was almost ready when my friend said to me, "Susan, the color of the water around Joshua . . . " Oh God. I knew at once that Josh had pooped. I was afraid that this might happen so I had been asking him all afternoon, "Josh, do you need to go potty?" He had replied with a resounding, and even slightly offended, "No!" Alas, just asking had not been enough. I pulled him out right away, wrapped a towel around him and marched him to the bathroom while my friend went to go tell the lifeguard, who got everyone else out of the pool. Cleaning him up in the shower was a feat of indescribable grossness. After a long time of cleaning up, we emerged.

It struck me that Josh felt no embarrassment. Or if he did, he had no way of showing it. He just seemed relieved, maybe refreshed even, in a fine mood and ready for dinner. What must it be like to be that free/ devoid of social shame?

Everyone was very nice and understanding. Even the kids (age 6-16) of our host family seemed empathetic and full of grace. The only unkind presence was the voice in my own head.

My husband had asked me, when he checked on me in the bathroom during the clean up phase of the evening, "How are you doing? Are you feeling ashamed?" Honestly, I didn't feel ashamed. What I felt was waves of massive anxiety, the dark scenario that we would be experiencing these same things when Josh was 30. That he'll never be potty trained. That, someday, I will miss some really important, verbally unexpressed cue from this mysterious little guy and something really bad will happen. I guess that's where my struggling heart goes. The darkest scenario of all, I realized, is that I would miss something and Josh would die, like the other little girl we knew of, who also had Septo-Optic Dysplasia, who died after getting the flu. I woke up this morning with even more anxious thoughts, which stayed with me for the rest of the day.

The thing that burst the anxiety bubble for me was later this afternoon when I tried to get a post-nap Josh to drink some water. He did but then promptly threw up all over his bed, himself, and me. It was completely ridiculous. I just had to laugh. Really? Is this really happening?

In that moment, I realized how absurd it is to try to be in control of this person's life. UNEXPECTED THINGS ARE GOING TO HAPPEN. Crazy, silly, mortifying, embarrassing, difficult, challenging, memorable, smelly, messy, grace-needing things are going to happen. It's just a given with Josh. Here is a child who is an adventure. Life with Josh is going to be really, really different and I can't control that. I can try to pretend that I am in charge of nothing bad ever happening or I can buckle up and ride the ride.
Posted by showerheads and hairdryers at 6:52 PM

I'm Susan. I'm married to Alex and the mom of Joshua, Hope, and Anna.
Our family is a blend of Korean, Chinese, Cambodian, Vietnamese, Laotian, Irish, German and Dutch heritage.
We love Jesus, people, good conversations, dark coffee, foods of many cultures, traveling the world vicariously through our friends and living close to excellent doctors.