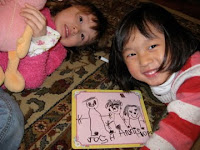 Yesterday my girls did two things that were so sweet and memorable that I just have to write them down.

I was dropping Hope off at her school in the morning. Because Josh and Anna did not have school, they were both with me. We were a big part of adding to the congestion in the hallway where Hope was hanging up her backpack in her cubby. Another little girl was standing next to Hope waiting for her turn at her cubby. She stood looking at Joshua, perhaps noticing that he was different. I initiated by saying to her, "Annie, this is Joshua, Hope's brother." Hope immediately jumped and said, in the same happy tone that she might use to talk about going to get ice cream, "He has special needs!"

Annie's dad, who was also standing there in the hallway commented, "Kids are so great." Indeed, they are. I savor the lack of shame or embarrassment in Hope about her brother. She is at a beautiful stage of just loving her brother and wanting others to know all about him. Hope is both exuberant and inclusive. To her, Joshua being different is not necessarily a bad thing. It's just who he is; who he always has been to her. I love that.

Later that afternoon, Anna spent a long time creating an art project using little beads. She has a big bucket of multicolored little tube shaped beads which she puts on a star or heart shaped board. When the child is done, a parent is supposed to iron it so that the plastic beads sort of melt into each other and you get a multicolored plastic thingy, which the girls absolutely treasure. I love this craft because it occupies them for a very, very long time and they are always happy with the results.

Anna had been happily working on this for almost 20 minutes (which is a long time in the world of a preschooler). She left her project alone for a few minutes to go to the bathroom. While she was gone, Josh sat at the table and accidentally knocked the project, and all of the little beads, over. Anna was understandably upset when she saw what he had done and let out a cry of disappointment and sadness. What surprised me, though, was what she said, soon after her discovery. She said, "Well, it's okay. He doesn't know. I can do it over again." Anna is not yet 4 years old. How is it that she was able to set aside her emotions and sense of being wronged because she has perspective on the capacities (or lack of capacities) of her brother? How was she able to have such grace on him when she had to pay such a cost for who he is? Maybe her dad and I are modeling some good things. Maybe she is just a very sweet soul (hmmm . . . sometimes). Maybe God is at work inside of her. I am guessing that it will not always be this way but, for now, I treasure these little snapshots of grace and love.
Posted by showerheads and hairdryers at 8:09 PM