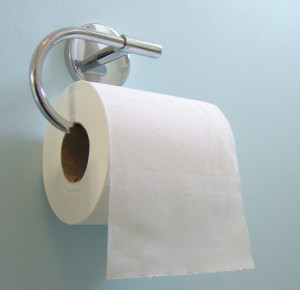 **Disclaimer.  This post is happy but clearly about issues of toileting.  If you are sensitive to talking about that kind of thing or if you are having lunch right now, you might want to skip this one.


Somebody say "hallelujah!"  Can I get an "amen"?  Gimme a hand clap!  Let's all whoop out loud for today my son took a poo and wiped himself all without any help from anyone.

I woke up this morning to his big boy body sneaking into our bed on my side.   A few minutes later, my husband went to the bathroom and discovered that Josh had already been there.

This is bad news because for the past two years, Josh has been able to get himself to the bathroom to do his business but was not very amenable to wiping.  Therefore, if he went in the middle of the night, he would simply pull his pants up after pooping and go back to bed.  The result was usually not pretty.

"Is there toilet paper in the toilet?"  I asked.

I got up and took a look for myself, not completely believing that my husband had looked very carefully.

I pulled the happy snuggler out of my bed and checked.  Actually, he had done a very good job.

Then it dawned on me.  Josh had gotten out of bed, taken himself for a nice morning poo, AND HAD WIPED --- all by himself! Today was the day!!

And there was no poo in his hair or on his clothes or on the walls.  There was no pee on the floor.  All of the toilet paper had made it into the toilet.  It had all been done correctly.  I'm not completely sure about the hand washing but I decided not to go crazy with my expectations.

Yes, he's almost fourteen but this is a day that I never thought would come.

We've been in potty training Josh for almost twelve years.  He started sitting on the little training potty at age 2.  Every step seemed to take a zillion times longer than for a typically developing child.  I remember putting night time diapers on him at age 9, worried that we would stop being able to find diapers in his size wondering, "What will we do when he is an adult?"

Josh just never seemed all that motivated.  There was no desire to be a "big boy" and to be like other kids.  He was fine just to go in his pants or bed.  He was happy to have us wipe him.

He's had accidents in every possible conceivable place: in the car, at the grocery store, at the bagel shop, in other people's homes, at church, and in the great outdoors.  He even went through a season when he would pee on electronics like DVD players, portable stereos and TVs.  Ah, what adventures we've had.  I've had moments of panic in so many different contexts as I've raised my little blessing.

I've had consultations from multiple autism specialists, a visual impairment specialist, several occupational therapists and a physical therapist.  I am guessing that we've had at least 15 college educated people plus a half dozen people with masters degrees working on the challenge of teaching my beloved boy to wipe his bottom.  We even went to one pediatric psychiatrist with an MD/PhD for a couple of consultations.  We paid him $300 an hour to basically show me how to make fancy charts.

Like an annoying, demanding relative who lives with you in your house, toilet training has always been with us. You just wake up and keep giving it attention every day, accepting that this is a part of your life.

But now, he's done it. My son wiped his own bum successfully all by himself.  I'm not sure if we are yet fully living in the promised land of full toileting independence but we've experienced the fruits of our determination today.   I'm proud and I'll blog it from the rooftops!  In my little special needs parenting world, today hope prevails.
Posted by showerheads and hairdryers at 1:52 AM