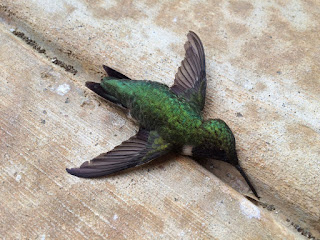 The girls picked up on Mom's stressed out tone of voice and scrambled out of bed.  They were very impressive in this mini crisis getting themselves (and even helping Josh) to get ready. Someone got Josh a glass of water.  The other one gave him a very crispy piece of toast. Teeth were not brushed thoroughly and we all had crazy hair but we were only 5 minutes late heading out the door with breakfast in our hands. It was a miracle of morning productivity yet it was clear that we were all adrenalinized and on the brink of snapping at each other any minute if anything were to go wrong.

Do you know what gave me the most energy in the midst of this flurry of activity?  It was the fact that Josh smiled through the whole thing.  My son's super power is that he does not pick up on other people's emotions.  Yes, that's often a downside in social interactions but in moments like these, when negative or stressful emotions are swirling around, it can be so helpful.  Josh woke up happy and was blissfully clueless that others were not.  He was glad to be awake and no one was going to take that away from him.

Unfortunately, we opened the front door and found a dead hummingbird at our doorstep.  I think one of the girls might have even stepped on it's little dead wing as she went out. Weeping ensued. It was like a little handful of cuteness and beauty had been crushed right in front of us.  They demanded that we give it a proper burial right then and there. We three females all felt the spike of sad, negative energy in the moment.  Aya.  What to do?

"Girls, girls, please.  I am begging you.  Can we deal with this later?"  I gently placed the hummingbird's corpse in what I called a "special resting place" under a purple bush in my front  yard.

By some miracle, the girls were both able to choose to be redirected.  Josh was already in the car, munching on an apple and smiling broadly for some unknown reason.  At this point in my life it is such a beautiful thing that at least one of my children is pleasantly resistant to being infected by the negative energy or emotions of others.  He does not get pulled into the panic or anger or sadness of the people around him.  He is just where he is at.  I find that sort of wonderful.

I want to be someone who can smile and remain happy even when people around me are not.  What is the secret to not getting sucked into other people's stress or negative emotions?  Short of having autism, my guess is that the answer is to become a person who is deeply rooted in peace.  I don't even know what that would look like but I want it.  I want to have a spiritual and emotional force field to the destructive and dark vibes that swirl all around me in my day.

Sometimes life hands you a dead hummingbird on your front door on a day when you are already running late.  Some days are just like that.  The next time I have one of those days, I am going to picture my happy, apple eating, emotionally unfettered son and try to remember that I do not have to sink into heaviness and despair.  It is possible to be free and happy even on chaotic, dead hummingbird days.
Posted by showerheads and hairdryers at 5:55 PM