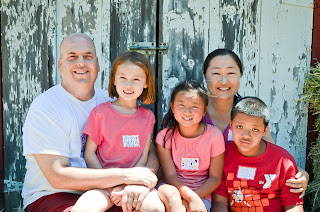 The weather topped 100 degrees but we were still having a blast!  Every year the regional office of our adoption agency hosts a "Family Fun Day" at a ranch which belongs to a family that supports the organization.  Our kids get to enjoy horseback riding, snow cones, face painting, a BBQ lunch, jumpy houses and a ton of other fun kid activities.  Josh enjoys it because we let him consume as many snow cones as he wants.  By the end of the day Josh becomes a happy, sticky mess!

This year, at lunch, Alex had an interesting conversation with the woman who organized the event, who is also in charge of public relations.  She enthusiastically told us that Hope's birth mom had come to share her story at an agency event recently and that it was so touching to hear more about our family.  Our agency has invited us to share through several venues and platforms about Hope's adoption story.

There has been a great deal of interest about her story because we have a very successful open adoption situation with Hope's birth mom.  Miranda visits us three or four times a year and has a very positive relationship with Hope.  She is a very mature and gracious person whom we trust to be a good presence in Hope's life (and the lives of our other kids as well).  She's also a great voice for Bethany because she's thoughtful, articulate, poised, beautiful and has had a profound spiritual revival in her life through the process of choosing to give birth to Hope and place her for adoption.  We have been so glad that our story has been used (by the organization and by God) to encourage others about adoption in general and about open adoption specifically.  Below are some links to some of the content that has been produced about Hope and Miranda.

However, Alex found himself sharing with the staff person from our agency that it was a little sad for him that, while Hope's story has been told very publicly, there has not been much interest in Josh's story.  Now, it's rather obvious why an adoption agency might not want to highlight Josh's story.  His is a story that says to prospective adoptive parents, "you might adopt a child hoping that he would be healthy but then they turn out to be a severely disabled, medically complicated person".  This is not a adoption agency's publicist's dream.  After we adopted Josh, Alex and I used to joke that we'll probably never get invited to come speak at those prospective adoptive parent trainings because our family story would probably scare everyone away!

Not every child gets to have their story put into videos and articles.  Still, the imbalance between the interest in Hope's adoption story and Josh's adoption story is painful for us especially because it's the healthy, typically developing child who gets a lot of attention and the special needs child who gets ignored.  For us, as parents, both adoption narratives feel like stories that should be told and celebrated.  I suppose that it's the conviction that Josh's story needs to be told that causes me to write this blog.  He may be mostly non-verbal and hard to get to know but I believe, with all my heart, that his story is important.

Surprisingly, the woman listened with an open heart.  She emailed us a few days later to ask if it would be ok for her to talk to the agency's national communications department about doing a story about Josh for their quarterly adoption magazine.  Apparently, it fits right in with a special focus that the organization is launching about adopting kids with special needs called, "Courage to Love".  We told her that we'd be glad to participate!  I feel so touched that the agency is one who is feeling moved to address this topic.

I just got off the phone with a writer who has been contracted to write the story and am looking forward to seeing what kind of fruit this produces.  I'll blog about this more later, hopefully with links to the story about Josh. 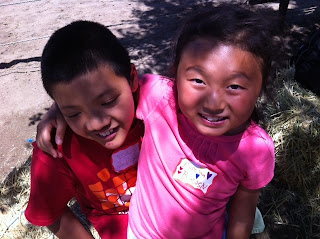 Posted by showerheads and hairdryers at 11:06 AM