Yelling at Your Kids 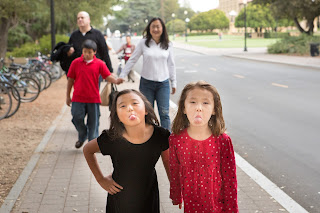 Ok, you parents out there, are there any of you who never yell at their kids?  That was a rhetorical question.  If that's you, I don't want to know.

Actually, there was a time when I did wonder how mature, thoughtful, spiritual people could ever yell at their kids.  When Josh was about three years old, I remember talking to a fellow mom who was really struggling with yelling at her kids.  She was a little depressed and her husband travelled a lot.  She confided in me, assuming that all parents struggle with yelling at their kids, or losing their patience in their own way, now and then.  At that moment, I realized (but didn't say to my friend) that I had never yelled at Josh.  Sure, I cried, I despaired, I stressed, and I yelled at my husband but I never yelled at Josh.  It seemed impossible to yell at a severely intellectually disabled child.  Yes, he frustrated me plenty but he has such an aura of not being able to help himself that I found it easier to not let my frustration out on him.  And not having ever yelled at my only child, it was easy to think that I was just not "a yeller" and never would be.  After all I loved my child and was committed to compassionate, sensitive parenting in a safe, calm environment.

Then I had typically developing children.

My daughters are lovely people.  They are bright, charming and often delightful.  However, typically developing children have "normal" characteristics that Josh just never developed.  They try to manipulate situations.  They experiment with lying.  They speak disrespectfully.  They blame and compete with each other.  It turns out that these are things that take quite a bit of intellectual capacity to be able to do.

I've realized these are some of the things that really push my buttons and cause me to lose my cool when I am stressed. I am definitely no longer someone who has never yelled at their kids.  I don't think I'm a chronic, out-of-control yeller but I definitely could work on my tone just as much as my girls need to work on theirs.

Recently, I've been trying something that seems to be helping me.  I just respond to everything they say with "I'm not sure.  I'm going to have to think about that."  Or I just say, "I don't know."

"Mommy, you promised that we could watch TV!"

"Moooommmm, Hope took my toy!  I want it back!"

Jim and Dr. Charles Fey, of the Love and Logic institute, call it "going brain dead" and it's one of the strategies that they suggest to help parents to stay calm in the midst of stressful situations.  They tell you to find a simple, neutral mantra like "that's so sad" and just say it over and over again, especially if your child is trying to draw you into arguing with them.

My girls don't love it when I respond that way but at least I am not adding my own emotional fuel to the fire.  It creates some space and some time for everyone (including me) to mellow out and not argue or yell.  Most times, coming up with a good argument only amps the situation more whereas a statement like "I don't know" slows things down in a helpful way.

I think that it's ironic that what I am finding useful in my parenting to me is to become a little bit like Josh and be intellectually impaired (or at least, disengaged) so that I might be emotionally wiser.  And the truth is, when things are heated, I often really don't know what to say or do.  But I do know that creating a brain break for all of us is a gift.

Posted by showerheads and hairdryers at 11:12 PM