My sister and I happen to be fair skinned for Korean girls.  Since we grew up in the rainy state of Oregon and rarely saw direct sunshine, we despised our paleness, as it seemed, to us, a sign of poverty and unstylishness.  Living in the Pacific Northwest during the height of the 80's tanning salon fad we were always covetous of the "I can afford to vacation in Hawaii and lay around in a pool or play tennis in the sun" look that the people around us were always seeking, authentically or otherwise.

When our family visited Korea when I was in the fourth grade, my sister and I were shocked and confused to experience that our pastiness was actually held in very high regard.  Random people that we met at restaurants would comment with delight about how "wonderfully white" our skin was. One time, an older lady who happened to be with us in an elevator at a department store reached out and lovingly stroked my face, as if to confirm for herself that I, indeed, had such a fabulously light complexion.

It was around that time that I realized that there was a whole set of physical attributes that my Korean culture and extended family affirmed; light skin, big eyes, high cheekbones and a high, narrow nose. It took me a few more years to realize that these are not the typical characteristics of a traditional Asian face but, rather, a Caucasian face.  And yet, my culture affirms and delights in the attributes that are not common or natural to our own people.  South Korea now has the highest number of cosmetic plastic surgeries in the world per capita overtaking Brazil as the plastic surgery capital of the world.  One in five women in Korea have undergone some sort of cosmetic procedure, which have become popular graduation gifts from students' parents.

Not only do we affirm those who have more Caucasian features, we look down on those who have features that are more commonly occurring to Asians.  Dark skin, slim eyes, broad cheeks, and flat noses were seen as undesirable, even ugly.  Ladies encouraged moms who gave birth to "unfortunate" children with flat noses by saying, "Don't worry.  It will grow into being more raised. Just give it little pinch every day."

As I look back to my childhood and youth, I am astounded and ashamed at how deeply I had internalized that prejudiced paradigm of beauty.  I have a memory of going to a dance in high school at a town about an hour from my hometown.  I was one of a handful of Asians in my school so I was quite used to being one of the only Asian Americans around.  Somehow, there was a group of Asian boys at this other high school and as soon as I walked into the room with my blonde haired friends, we were aware of each other.  Eventually, one of them came over and asked me to dance.  I was self conscious for several reasons.  I was a teenager and, thus, spent most of my time being painfully self-conscious in general.  Also, dancing with an Asian boy made me aware of being Asian, which made me feel self-conscious.  But the most important factor in my discomfort was that this boy was of Southeast Asian origin and had the characteristics that many Southeast Asians have: dark skin, a shorter build, and a flat nose.  I was so repelled by his looks and so uncomfortable with the situation that I quickly made an excuse and walked away.  Also, he had put his hand on my butt.

Now, as a mother to a boy with Southeast Asian heritage, I reflect upon my own culture's obsession with western standards of beauty and my own internalization of those values and I grieve.  I want to shake off those messages that you have to look western to be beautiful like a dog shakes off excess water after a bath.

I'm so glad that Joshua's lack of awareness about the subtleties of cultural values prevents him and protects him from taking in inappropriate and incorrect messages that he is inferior because he has a broad nose and dark skin.  And trust me, his nose is flat, flat, flat.  My husband and I sometimes joke about how we wonder if there is any cartilage in there at all even as we are admiring how stunningly handsome our son's face is.  Now, I see how perfect Joshua's flat nose is on his face.  And in the summertime, Josh's skin turns into a beautiful caramel macchiato color that is, on him, glorious.  To a mom who adores her son, everything about how God made his appearance is a thing of wonder and artistry.  In this way, I believe that God is using "mother love" to transform me to see the world more rightly.

Recently, in his response to the Trayvon Martin/ Zimmerman case ruling, President Obama exhorted Americans to be "a little bit more honest and ask yourself your own questions about, am I wringing as much bias out of myself as I can?  Am I judging people as much as I can, based on not the color of their skin but the content of their character?" I think that what he is getting at is that racism and prejudice is not a binary reality.  It's not that some people are racist and some are not.  The truth is that we all have ways that we've been influenced by fallen beliefs that do not reflect the heart of God and of righteousness.  For me, trying to walk in rejection and repentance of  my own culture and upbringing's definition of beauty is part of that "wringing out" process. 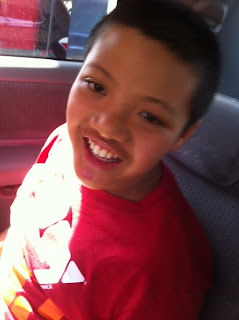 Posted by showerheads and hairdryers at 12:16 PM