What I've Learned from Josh (A Guest Post from "Auntie Rachel") 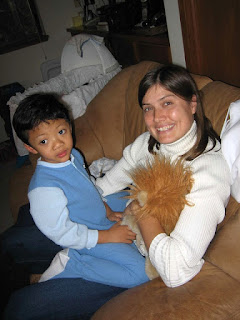 I've known Josh almost since the day he was born. Susan and Alex lived upstairs from me and my roommate for Josh's first year of life. In light of his heath issues and my night owl tendencies, I had many middle of the night shifts feeding him very specific amounts since his body didn't give him appropriate signals regarding when to eat or the necessary amount. I don't know how much of it is because he was the son of my very good friends who had wanted him so badly and how much of it is because of that year of helping him to live, but I know that I've always loved Josh.

Yet it's tricky to know how to communicate that to Josh or how to have a meaningful relationship with him.

I no longer live in the same area as his family and, at best, I only get to see him twice a year. Generally, I'm good at figuring out how people work and how to build a relationship with them. With people who are important to me, I figure out how to care for them well, how to be a good friend to them, and how to help them know that they are loved.

I have no idea how to do that with Josh.

Perfectionism is a struggle for me and it comes out in my relationships. I work at them. I'm thoughtful with people. I'll go over interactions to figure out what I would have liked to have done or said differently - sometimes intentionally, sometimes compulsively. The more that I care about the person, the more I work. And usually I can see the pay off for that work in strong relationships and people who feel cared for by me.

But with Josh, I don't even know what work would really look like. Despite all of my relational skills, I don't think that I could ever reach the place of feeling like I'm competent and confident at how to relate to him or how to communicate to him how much I love him.

I found myself thinking about Josh recently and aching a bit about how much I love him and how incapable I feel to really communicate that to him. But then God made me take pause. "Oh, Rachel. What's reality here?"

The last couple of times that I've visited Josh and his family, Josh has clearly wanted to spend time with me. The visit before last, it came up just a couple times. Josh likes to spend quite a bit of time by himself in his room. Most of the time others are not welcome. But he very specifically wanted me to hang out with him. "Sit, please." Josh is often polite while being rather insistent. So, I sat on the end of his bed while he drew or listened to his radio for a while. After a stretch of feeling like 'is this really doing something for him?' I got up and immediately received, "Sit, please." So, I sat.

Several months later on my most recent visit last spring, I was washing dishes on the first night and Josh came to get me and took my arm to pull me toward his room with 'Sit, please.' So we hung out. I played some ukulele for him, but I feel like it just gave me something to do. Josh just liked me being present. During the days that I was there he initiated with me so much that it stood out to the rest of the family as atypical Josh behavior. And it was often enough that there was no way to interpret it as random. We couldn't understand it, but it wasn't random. My last dinner with them, Josh was his usually quiet self while I chatted with his otherwise very talkative family. But when I got up to leave the table, there it was again. "Sit, please."

I don't know why Josh likes hanging out with me. Susan, Alex, and I have speculated about what it is about my personality or demeanor that he finds appealing. But in Josh's way, we're friends. And because I love him, that means a lot to me.

But more than that, my relationship with Josh is now a reminder that I don't have to have it all figured out in my friendships for them to become what I want them to be.