My Daughter Called Me a Sinner Today 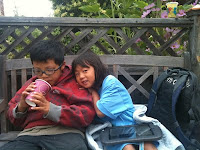 Nothing makes my five year old daughter, Hope, more angry than when Mommy yells at her brother Josh. Today, when I did not get Joshua's beloved frozen mangos for him fast enough (uh, because I was dealing with an OVERFLOWING TOILET!) Josh took a bowl full of bread crusts and crumbs from breakfast and threw it all over our living room rug.
"No Josh!" I yelled, loudly, . . . and then I took the Lord's name in vain. Yep. Completely lost it. I know he's got an intellectual disability and everything but, he did it on purpose and he did it to make me mad. He was successful. I went in full on "Oh no you don't" mode. I put the plunger away then I grabbed his hand and made him pick up every bread crust and crumb on that rug. Then I made him take a time out in his room where continued to scream his head off.
All the while, Hope was seething. I had told her that I could not deal with her until I was done with her brother. In fact, I think I actually had said, "Put yourself on hold, Hope. I'm dealing with your brother right now!" To my surprise, she did. Finally, after I got Josh into his room, I took her into her room to give her some focused attention. I took her in my lap, held her tight and then I told her that I could see that she was mad but that I was proud of her for having self control and not losing it as well.
Then she looked at me and said, "Mommy, you're a sinner."
Can you believe that? I mean, yes, I am and I totally was being a sinner but I didn't even know she knew that word. We don't do a lot of talking about being "sinners" with them, even though I do believe in the theological concept. We are more likely to talk about "needing God's help"or "not being able to be good on our own" etc. It was like a slap in the face (albeit from a small, five year old hand) to be called a "sinner".
Hope went on to tell me that she loved Josh most in the world (after Jesus and God) and that I was hurting someone who she loved very much. "I hate it when you hurt Joshie, Mommy. You were being mean! You should clean that stuff up yourself!"
Oh man. Just kill me, why don't ya? She's worse than my own conscience.
I regrouped and said, "Hope, you're right. I shouldn't have yelled at Josh like that. That was wrong and it probably scared everyone. Will you forgive me?" She nodded her head without looking at me.
I continued, "But Hope, Josh also needs to learn that doing things like that is not ok."
"Why, Mommy?"
"Well, Hope, I don't let you and your sister throw food on the carpet. Josh needs to learn that too. He needs to learn the rules too."
Hope thought about that for a minute.
Her reply, "Well, why can't those people who come to work with him from school do that for him?"
"Sweetie, he needs to learn to be independent. He can't have aides or his Mommy do everything for him. Everyone needs to know that there are some things that you can do and that you can't do. It's part of growing up, even for him."
That seemed to make enough sense for her. She scampered off my lap to play with her sister. I sat in that rocking chair for a few more minutes, reflecting on what I had just said to her. Oh, man. How am I going to teach my son what is ok and not ok to do? Lately, he's been venturing into new realms of sneaky or inappropriate behavior, like hoarding food in his room or unrolling and eating toilet paper. How do I teach Joshua to have appropriate behavior and that there are consequences for his inappropriate actions?
One thing I do know is that yelling is not the way. Just as with typically developing children, when I yell, all Josh can do is get upset and react to the fact that I am mad at him. I don't often lose it with Josh but when I do, he always responds by lots of crying and hitting himself. My adrenaline is surging and so is everyone else's. This is not a good formula for teaching life lessons.
The problem is that Hope is so right. I am a sinner. I may have better social skills or cognitive abilities but, ultimately, I am no more able to control my impulses on my own than Joshua is. Today I am very aware of my need for God's help and my inability to be good on my own.
Posted by showerheads and hairdryers at 10:40 PM