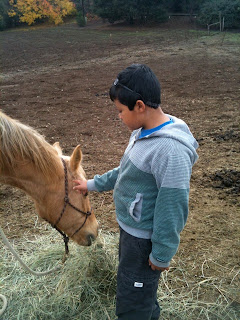 In our quest for physical activities for Josh, this fall we were able to connect with a woman who owns several horses and does private lessons for kids in a nearby town. The first meeting was quite astonishing. Josh immediately went up to one of the beautiful, calm horses with utter confidence. He patted the horse's face, nuzzled his own face in their the horse's flank and sniffed his mouth. Then my son started to giggle and smile. Joshua thoroughly enjoyed being around the horses. I have no idea why. After giving Josh plenty of time to "hang out" with the horses, we asked him if he wanted to ride one. Josh whispered, "yes" with a tone of seriousness and awe.

The ride itself was pretty uneventful. Josh had to work pretty hard to stay on the horse given the ups and downs of the trail. I think his low tone core muscles got quite a work out. Josh was very quiet during the whole ride and even sang a little bit along the way. Clued out suburban mom that I am, I had worn some cute sandals with a bit of a heal so my feet were heavily blistered by the end of our 45 minute trek. I didn't care one bit. We found an activity for my son that he enjoyed and was good for him. I was thrilled!

At the end of our time, I nervously asked the owner of the horses how much she would charge. It is quite common for people around here to charge $100-$150 an hour for therapeutic riding for special needs kids. I have done reams of paperwork trying to get our insurance to cover even part of it to no avail. The woman, who obviously had a heart for kids like Josh, said to me, "Could you folks handle $20?" It was music to my ears!

Since that day, we've gone riding about 5-6 more times. Josh always has a quiet but happy demeanor. This last time, we were apparently taking too long to get things going so Josh went and found a step stool and placed it next to a horse, took my hand, and said, "Wanna go upstairs on the horsey." Once up, Josh was content and calm.

There is a movie that came out a few years ago called "The Horse Boy" about a family that takes their autistic son to Mongolia to hang out with horses that are inexplicably soothing to him. I don't know about all of the mystical stuff that the movie explores but I do see that there is something about the horse/human connection that is mysterious. Never having been a horse person, myself, I haven't experienced this personally.

My father was a horse person, having ridden them extensively in his youth in Korea. Later in his life, he had the honor of being on South Korea's first equestrian Olympic team ever for the 1964 Olympics in Tokyo. But for me, horses have always just been expensive, inaccessible and smelly. We could never afford to get time on horses as we were growing up so they were just big creatures on TV to me. Now, I have more respect, more questions and more of a sense of intrigue about the gift of horses. 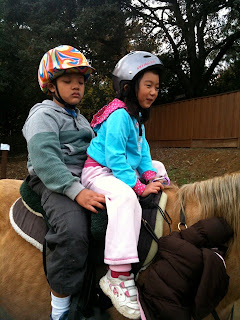 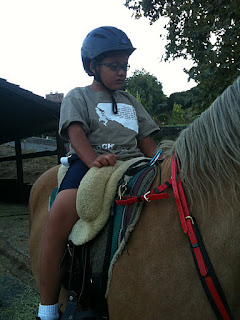 Posted by showerheads and hairdryers at 7:10 PM