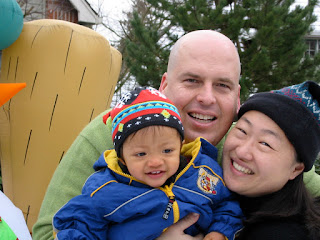 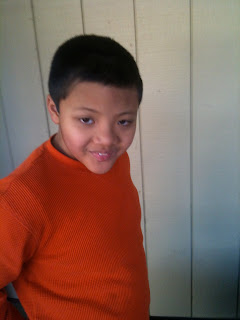 I still call him "Baby" even though he's ten years old and almost a hundred pounds. I am guessing that every mother has, inside of her, a sense that each of her children are her babies.  We've known them and cared for them since they were in diapers.  We've known every part of their growing up process.

Like everyone's babies, mine is certainly growing up (or at least he's certainly growing older and getting bigger).  And like most moms, watching my baby grow up is bittersweet.  He doesn't always want me to snuggle with him now and sometimes he prefers to be alone than being with me.  I marvel at how quickly these years have gone by and how he's suddenly a fifth grader!  Next year he'll be in middle school (albiet in a special needs classroom).  His childhood seems to be speeding by at lightning speed.  To watch this happen feels like a sweet pleasure mixed with pride and abject fear of the future.

The difference between my ten year old and other people's ten year olds is that mine still can't talk much or write his name yet.  He has not yet learned basic safety things such as our phone number or address and is basically still a person who needs one to one supervision at all times.

One challenge that I have is what to do in terms of going to the bathroom when we are outside of our home.  Although Josh can do most of the steps of a trip to the bathroom himself, he can't always make his way around a new bathroom.  Also, without prompts, he can get stuck on parts of the process.  For example, he would probably wash his hands for a half and hour if sometime didn't tell him to move on.  I am starting to feel the tension of bringing him into the ladies room with me when we are at doctors visits or out shopping or at church.  People are often confused and even uncomfortable with having a bigger kid in the ladies room.  Some places, such as the YMCA, posts signs saying that boys who are over 7 years old, are not allowed in the women's dressing rooms or restrooms.  Thankfully, most people are quite understanding when they see that Josh is not a typical child (and his noises or flapping usually make it clear to anyone who is paying any attention.)

I experienced this problem with surreal clarity and painfulness on Christmas Eve.  There was no childcare or a buddy program at our church on Christmas Eve as it was a "family service".  Josh declared in the middle of the service that he had to go to the bathroom so I left my girls in the care of a friend and took him .  My husband could not help because he is one of the pastors of our church and he was giving the Christmas Eve homily.  Personally, I think that being in the room with so many people was starting to make Josh anxious and he knows that the bathroom is a place  where he can take a break and be in a more "safe" place.

Now, our church meets in a community center and so there are often people around who are not necessarily there for church functions.  This day, there happened to be a homeless woman who had set up her belongings in a corner of the warm bathroom.  She did not seem to be completely mentally balanced because she immediately took great and loud offense that I had brought a "man" into the bathroom.  "What if I had taken off my clothes?!" she asked, seething with anger.  This struck me as a little funny because this woman had tied about 20 plastic bags to various parts of her clothing.  I figured that it would take her at least a half an hour to take off her "clothes".

I tried to explain that Josh has special needs and he can't go to the bathroom himself.  "Besides," I told her with an attempt at a winsome smile, "He's visually impaired.  He can't really see you all that well, anyhow."  This did not win her over.  She continued with a barrage of angry words punctuated with lots of swearing.

We could not leave because Josh, who seemed glad to get out of the room with lots of people in it, was now happy to be in a stall and insisting that he had to poo.  Then he started laughing and clapping and saying, "Wanna go poo poo on the potty" over and over again.  The woman continued with her verbal barrage of swearing and, in the background, I could hear my husband's sermon as he talked about the true meaning of Christmas or something like that.  It was, to say the least, an odd moment.

All I could think about was 1)  What am I going to do to get out of this situation? and 2)  We have got to get this kid more independent living skills.  Finally, I convinced Josh that we were done and we high tailed it out of there.