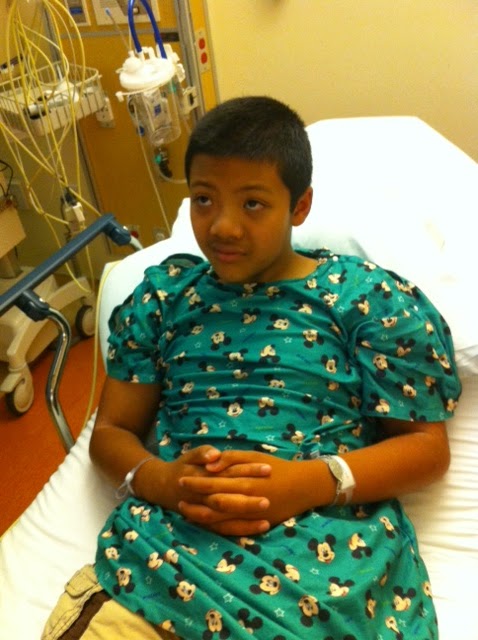 Our dentist is the Rolls Royce of pediatric dentists.  He is a professor at Stanford University Medical Center.  His private practice, which has a waiting list a mile long, specializes in unique and difficult cases of pediatric dentistry.  His waiting room is filled with children with special needs and their stressed out parents.  Dr. Adams is very dignified looking African American man in his sixties.  I think that he’s had an extremely successful career and he drives a very expensive sports car.  He always wears a bow tie with some sort of child friendly print but his manner is all business.  His staff speak in very low and respectful tones around him.

Like many autistic children and children in general, my son does not do well with people poking sharp instruments into his mouth.  He had a stint of doing well at his cleaning and check up appointments for a couple of years but after several years of completely unsuccessful appointments we elected to try sedated dentistry at our local children’s hospital.  The plan was to do a cleaning, X-rays, sealants, and a thorough check up, all while Josh was under anesthesia.  Because of Josh’s endocrine issues, a team of anesthesiologists and endocrinologists were also present to make sure that his hormone levels were managed while he was under.  Like most medical processes with Josh, it was quite a production.

The morning, which began swimmingly, came to a grinding halt when Dr. Adams met with me after the procedure to tell me how things went.

“Well, we found some cavities,”  he began.

“What? “ I was very surprised, as Josh had never had cavities in his life.  “How many?”

My face must have immediately betrayed my key emotions – shock, anxiety and shame.  I’ve done a bad, bad job with my beautiful son’s teeth.  I thought of all of those times that I didn’t want to fight with Josh to floss so I didn’t.  I wondered if Josh would ever learn to brush on his own.  I imagined Josh losing all of his teeth and having to get false teeth, which a thousand specialists would have to be involved in.  They would whisper to each other, “His mother didn’t do a very good job managing his teeth.  She’s a bad, bad mom, you know.”

I expected that Dr. Adams would respond with some firm encouragement about better dental practices at home.  What parent doesn’t dread what the dentist will say when their child has failed the cavity test?

But Dr. Adams surprised me with his kindness and grace.

“You know, my sister has cerebral palsy,”  he shared.  “It’s hard to brush her teeth because she doesn’t have the muscle tone to keep her mouth open.  My parents and I really struggled with it her whole life.  It can be really hard with kids like these.  Also, Josh has his cavities primarily because he has exceptionally deep grooves in the tops of his teeth.  This is not your fault.”

What do you know?  Our dentist gets it.  And that ray of grace was enough for me to pull myself together and be led into the post op room where my son groggily opened his eyes and smiled at me.
Posted by showerheads and hairdryers at 7:04 PM