Today was a wonderful, delightful, horrible, draining, inspiring, uplifting, confusing, chaotic, burdensome and beautifully rich day.  Ever have one of those?

This afternoon I took Josh with me to our monthly visit to serve dinner to local homeless folks.  My husband and I usually take turns bringing one of the girls along while the other parent stays home with Josh.  The church where this meal is hosted is lovely but the whole experience is rather loud and chaotic.  We've always just assumed that Josh would hate it.  Today both girls happened to have activities this afternoon so I took a risk and went with my son.  Developmentally disabled, visually impaired autistic people need to serve too, right?

Josh hung in there much longer than I expected.  From the first few minutes he kept saying, "I want car." but he eventually let me put some thick, purple latex gloves on him and helped me serve rolls with a pair of tongs.  The tongs were not easy for Josh to manage but as he gave himself to the task, his dexterity improved, especially since I told him that he could eat some of the bread after we had served the people.  My guess is that he served about 30-40 guests before he plopped himself down on bench behind me and loudly declared, "Want bread."  He spent a good chunk of the rest of the time gnawing on a roll (or five).

Josh had a subtly softening effect on the clients, even the clearly mentally ill ones.  One gentleman who was wearing a toga made of torn cloth with lavender flowers tucked behind each ear gave Josh a little smile as he went through the line.  It reminded me of how infants or dogs bring out kindness and gentleness in people.

By the end of the evening, several homeless folks came up to Josh and thanked him for his service.  I was worried that people might be offended by Josh's lack of social response or even eye contact so I said, "Sorry but he doesn't really talk."  The gentlemen were not at all deterred.  One nodded vigorously and knowingly said, "Oh he knows exactly what I'm talkin' about.  He can talk all right.  We just don't understand him."

Another man who had worn a hard, even fierce look on his face during the whole meal took a moment to encourage me before heading back out onto the street.  "You're doin' a good job with him. He's a fine young man."  This really touched me.  Honestly, the man has no idea whether I'm a good mom to Josh or a complete whack case of a parent but he wanted to extend some kind word to bless me.  I'll take that.

Josh sang and laughed in the car all the way home.  Who knew that he knows the words to Madonna's "Star light, Star bright.  First star I see tonight..."  He waved his hands in the air back and forth, back and forth in his little spot in the very back of my van.  The 10 year old friend of my daughters who was coming home with us for a quick play date astutely observed that Josh was very happy.  Truly, my son was a complete delight in that moment, a profound treasure.

Minutes later, the sun went down on my affections for my beloved.  I lost track of Josh for a few minutes as I was shifting into "getting people headed toward bed" mode.  My girls came home from piano, swimming and choir with many stories, requests and needs.  The world series was on TV so that also snatched up pieces of my fragmented attention.  As I was battling dishes while serving up placating slices of cake,  in the corner of my eye I saw that Josh's bedroom door was open and my bedroom door was closed.  I knew in an instant that he was not hiding out in his room but mine.  My mommy-intuition told me that something was not right.

I opened my bedroom door to see that Josh had found the pen next to my bed that I had been using to journal earlier today.  For some reason, my delightful treasure of a boy had chosen to draw all over several pillows and my brand new duvet cover.  How he had managed to draw so much in so little time I do not know.  Maybe he had thoughts or feelings or energy that he needed to get out.  He was a happy little soul, clapping and laughing, like someone who had taken a satisfying artistic dump on my bed.

I could feel my head and my extremities tingling with the stress of the moment.  Of course, that was exactly the moment that my girls chose to have a conflict and their friend's dad was due to pick her up at any moment.  I made it very clear that they all should steer clear of Mommy for a few minutes.

Later, at "Second Snuggle", the time I have a private chat and prayer time with each child, my daughter Hope asked me why I had been so upset.

"Hope, pillowcases I can throw away but I am very sad that Josh ruined my brand new comforter.  I don't know if ball point pen comes out and king sized comforters cost a lot of money."

Hope looked squarely at me and said, in her very 8 year old, Hope way, "Mom, you are too concerned with how things look.  Josh's designs look pretty.  A lot nicer than your boring old comforter.  You should be happy that he drew on it."

I was tempted to just scoff and dismiss what she said because she has no idea about how hard it is to maintain a household with a kid like Josh living in it.  But in a little corner of my heart I wonder if she's speaking some truth.  Maybe there is art in mess and some of the most beautiful art is found in the interaction between homeless people and children with developmental disabilities or in shower heads on pillowcases.  Maybe it is worth pausing and taking a look at things that autistic people draw on pillows and duvet covers.  I still think that I'm too uptight of a person to truly appreciate beauty in the midst of mess but I'm trying. 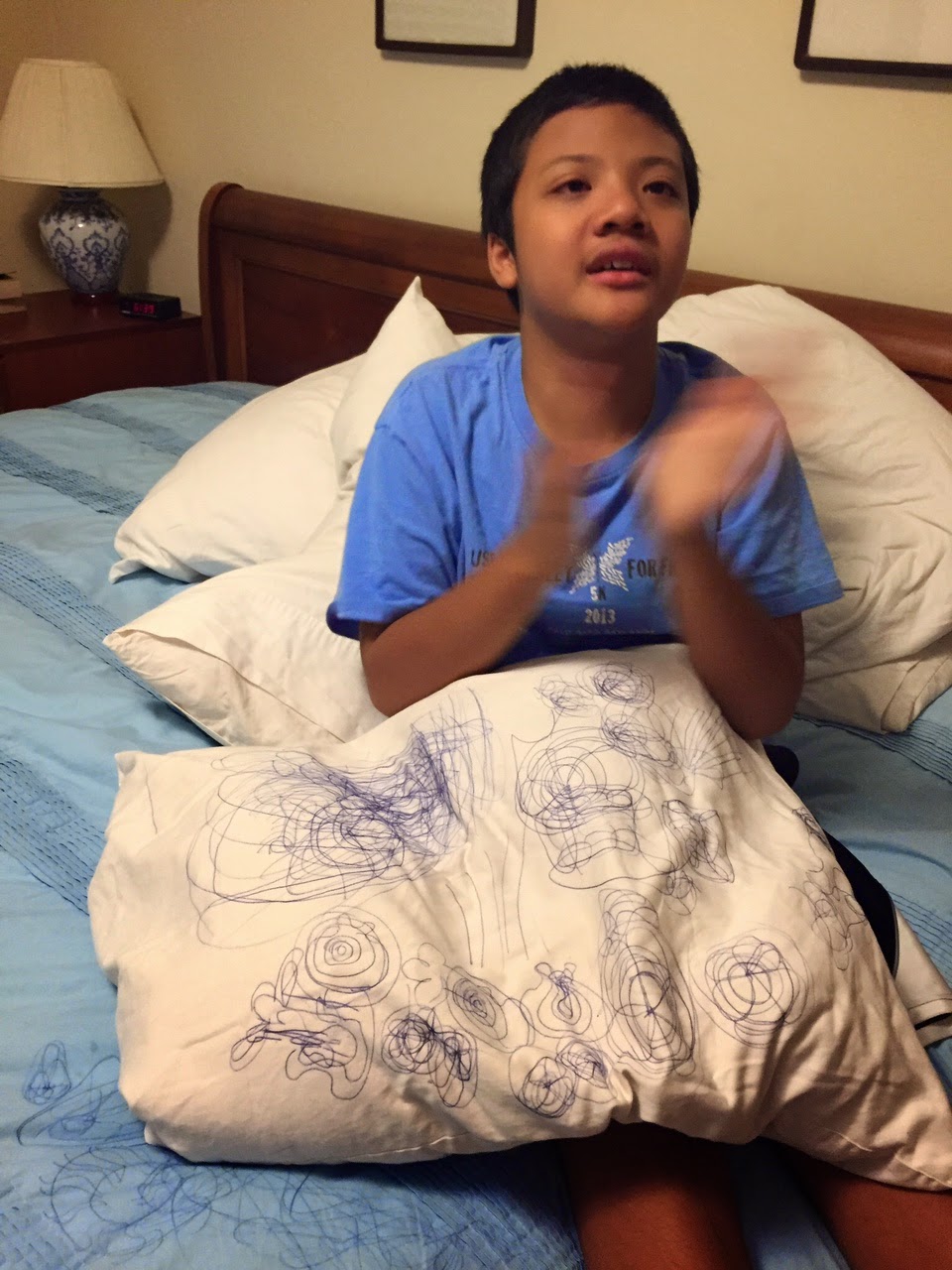 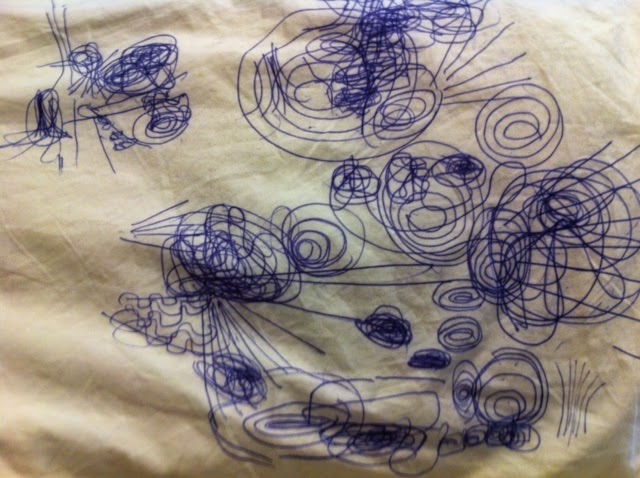 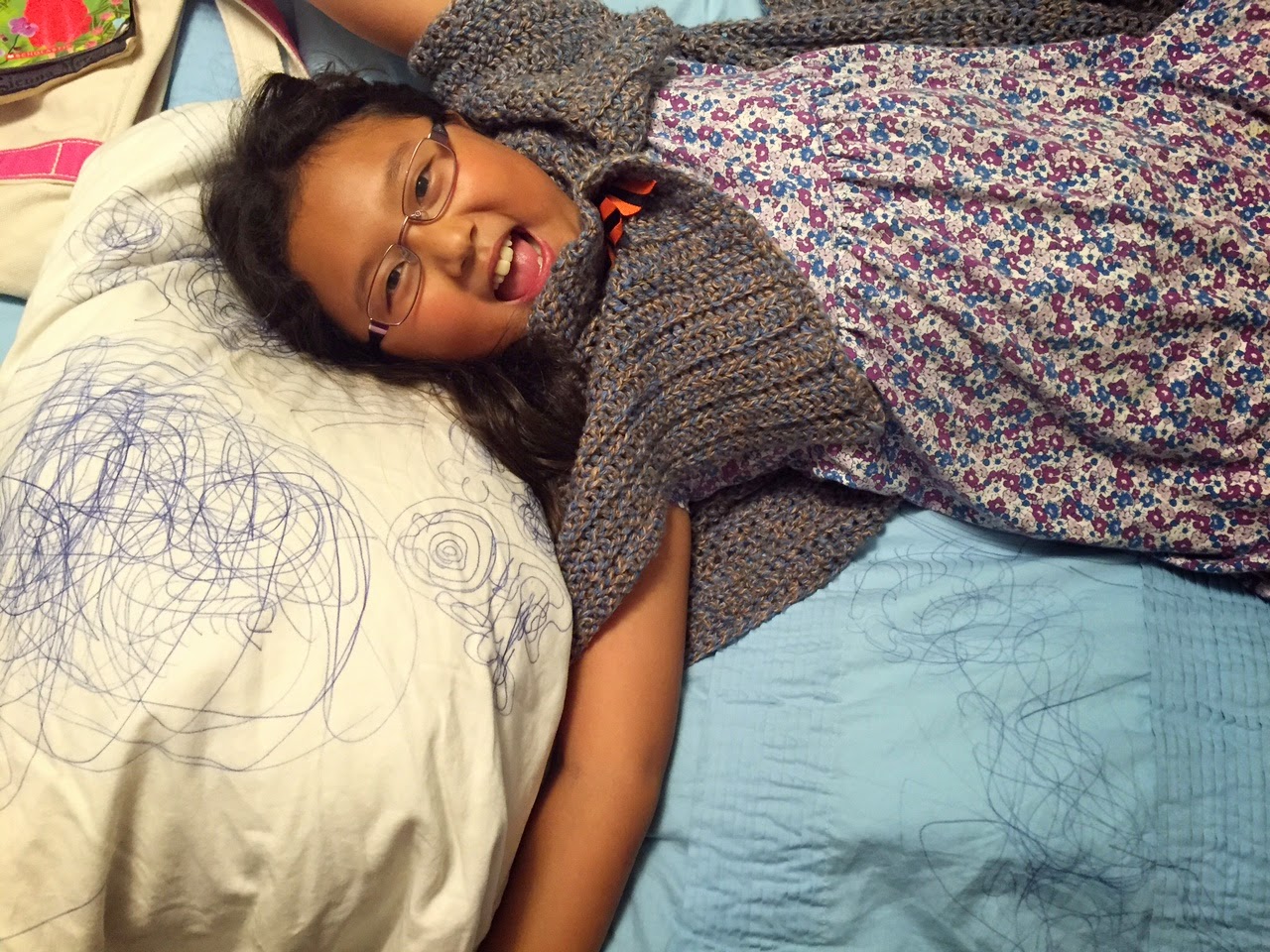 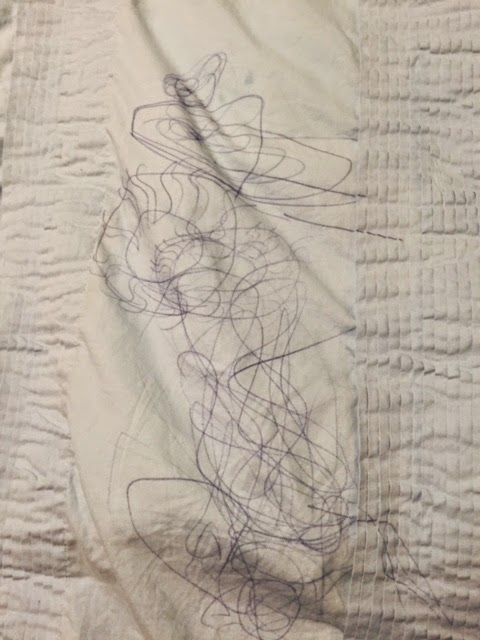 Posted by showerheads and hairdryers at 10:48 PM