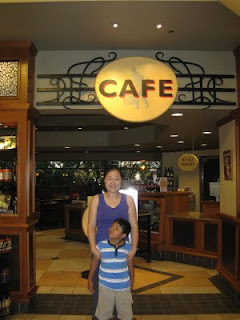 The other day Josh and I had an amazing and beautiful dinner together at the Nordstrom Cafe. We were at Nordstrom to purchase some unspeakably expensive shoes (due to various feet issues that my son has). We were both very hungry so we went and shared a cheese pizza and a nicoise salad. At some point I realized that Josh was calmly, quietly, yet enthusiastically eating his dinner without any strange noises or motions. He was even using his words to ask me for things that he wanted (like the 6 pats of butter that I let him have because I was so impressed that he was verbally asking for them). It was almost like being out to dinner with a typically developing child. (And an extremely well-behaved one at that!)

I almost couldn't believe what I was experiencing. I am so used to managing Joshua's strange noises and mannerisms and just ignoring the looks. One time Josh was walking in circles at Safeway and I wasn't even thinking about his strangeness until a very angry woman hissed at me to "control my child" better. This was often the norm when I went out with Josh. Yet here I was, having a really kick-butt salad (with perfectly grilled salmon) with such a lovely, enjoyable, peaceful child.

Later, as we were leaving the Nordstrom Cafe, I realized that we must not have quite appeared like a "normal" mom and son as an older lady was smiling at us so kindly that she must have realized that something was going on for Josh. I asked her to take a picture of us and she was happy to.
Posted by showerheads and hairdryers at 2:31 PM