Joshua's Sisters' Perspective on their Brother 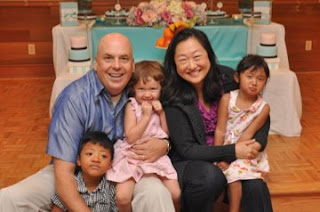 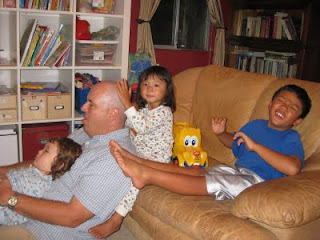 It's an interesting, amazing, and scary thing for me to watch Joshua's sisters grow in their awareness of the whole category of disabilities. The other day I was picking up Joshua at his after school program with Hope (age 3) and Anna (age 2). We were waiting for Josh to pack up and get ready to go when another participant in the program walked into the room. This boy had cerebral palsy, among other disabilities and, therefore, had noticeable differences in his gross motor function.

Hope asked me, "Why is that boy walking that way?"
I responded, "Well, I think his muscles don't work the same way as most peoples do."
"Why not?"
"Well, sometimes people are different."
"Why?"
(Are you getting a sense of what my life is like talking to two curious, extroverted preschoolers all day long? I get asked "why" A LOT of times in my day.)
I paused, trying to think of a good, accurate answer that would make sense to a three year old. Soon enough, Hope came up with the answer herself. "Like Josh!" she said, with a sudden sense of clarity. "Like he don''t have good eyes!"

To Hope and Anna, all of the things that Josh does has to do with the fact that he doesn't have "good eyes". (As a part of his central brain underdevelopment, Joshua's optic nerve is extremely underdeveloped, to the point where it was reasonable for him to have been blind. Miraculously, he does have around 20/200 vision.) What the girls understand, in their little girl brains, is that their brother is visually impaired and that is why his eyes make little movements (nystagmus) and that he is very conservative about walking around by himself at times. They don't yet understand that he also has autism, intellectual disability, panhypopituitarism, obstructive sleep apnea, and about 4 million other diagnoses. Whenever he does anything odd or upsetting or disturbing, they chalk it up to the fact that "he don't have good eyes". One day when Josh was having a major tantrum, screaming, hitting himself on the head, little Anna turned to me and said, "It's because he don't have good eyes. But that's ok. We will hold his hand when we go to the park."

Their acceptance of their big brother is so sweet and innocent. Even when he says, throughout the day, "Want sisters to go away" with great regularity, they love Josh and often wonder where he is. Josh is an always remembered part of our happy little family in their minds. "We are five, Mommy, aren't we?" or "I have one Mommy, one Daddy, one sister and one brother!" They do not yet ask complex questions like, "Why did God let Josh be how he is?" or "Why do I have to deal with a family that is so different?" or "Why doesn't Josh have any friends?" But I dread the fact that this time will come soon enough.

Until then, I savor the unconditional love that my girls have for their brother. I treasure every morning that they jump on his bed and hug and kiss him as he crankily wakes up. I smile when they want to wear his clothes. I know that these two girls will probably have a longer relationship with Joshua than I will, God willing. I pray that this precious time of bonding in their early childhood years is good, rich, and supernaturally full of love.
Posted by showerheads and hairdryers at 8:56 PM