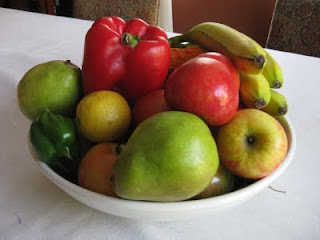 About 3 weeks after Joshua was born, we had to hospitalize him for "failure to thrive". That's the official, medical phrase for "he's not eating and not gaining weight". It was because of that hospitalization (after 3 more weeks) that we were able to receive Josh's initial diagnosis of Septo-Optic Dysplasia.

Feeding Josh has always been a big deal. For the first few years of his life, the child just wouldn't eat. He had serious oral aversion and oral sensory issues so he hated having anything in his mouth. I cannot tell you how much effort was put into getting Joshua to eat. We would have to do a big song and dance every mealtime to get him to consume a tiny amount. Then, often after getting some food in him, he would often throw it up because he also had reflux from an underdeveloped esophagal sphincter. We went to occupational therapists and feeding specialists to teach us how to feed him. I learned to put olive oil into his applesauce etc. This went on for years.

And the kid was always seriously skinny. Always under the 1 percentile. Usually not even on the chart. We were always concerned about his food intake. One time, when Josh was about 18 months old, I had to go speak at a conference right after Christmas so his Dad stayed with him at my parents house in Portland. I would call in to ask how Josh was eating. They would say "Oh, Ok". This was pretty much a big fat lie-- they didn't want me to worry. He had barely eaten.

Being a Korean mom, this was extremely difficult for me. I come from a culture where food is love, is community, is family, is happiness. So having a child that wouldn't eat drove me batty. But it also brought out my inner Sigourney Weaver and made me even more determined that THIS CHILD WOULD THRIVE! Little by little, I became really good at getting my son to eat.

Well, now Josh is 7 years old and somehow, he has gotten a little bit tubby. He has a very healthy appetite. Very healthy. These days on some weekend mornings, he can ask for and eat 4 waffles, a bunch of cut up cheese, 5-6 slices of bacon and 6 mandarin oranges. According to our last doctors visit, he is 50% height and 80% weight. He has gained 20 pounds in the past year. When he sits on the potty, he has little rolls in his midsection. Now we are concerned about his weight in the other direction. Visually impaired children are at a much higher risk of obesity because of the challenges of exercising. Indeed, Josh does not move around much and his great love is sitting around and listening to music.

Last week I went to a nutritionist to get some input for Josh (for weight as well as a bunch of other issues). She was a really nice, professional woman who communicated with an amazing balance of truth and grace/ empathy. With kindness, warmth, and a good listening ear, she built enough trust with me to basically kick my butt about giving Josh too much food. I realized through my visit with her that the traumatized Korean mom in me is having a hard time not overfeeding my baby. The nutritionist told me that I needed to exercise more portion control for Josh (since he doesn't yet get food for himself). She said that many, if not most, parents in America overfeed their children.

Tonight he asked for a third piece of toast and I told him that the only options were cucumbers or red pepper. Wouldn't you know it, he asked for red pepper and ate it happily.
Posted by showerheads and hairdryers at 9:03 PM