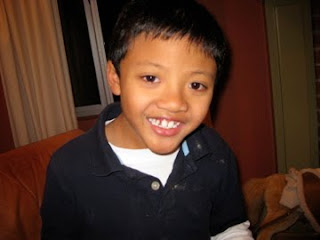 No one cracks me up like Joshua. Ok, my husband is a pretty funny person but the silly Josh moments catch me off guard and make me laugh out loud! The odd thing is that when Josh makes me laugh, there is no one to share the laugh with because he's not meaning to make me laugh and he's not aware of me laughing with him. Also, I'm usually busy being deeply embarrassed but also amused.

For example, there was the time when we were in line at the Costco food court behind an older African-American woman with a very large rear end. Josh walked right up to her butt and gave her a couple of good pats. Then he giggled. I knew that it was going to happen. It was like one of those "slow mo" moments where I could see it happening but was powerless to stop it. The woman didn't say anything but seemed to understand. I can't remember if I said anything (I probably did) but what I do remember is that it was hilarious in a mortifying kind of way.

Another example is when Josh and I were at Target together. We had just walked by the hairdryer section. A whole row of hairdryer boxes with pictures of various hairdryers; Josh was in heaven! Always trying to maximize opportunities to get Josh to use his words, I said to him, "What is it, Josh?" He replied in a awe-filled whisper, "blow dryers". Nothing else needed to be said. He was happy and satisfied for almost long enough for me to get through my list of things to get. We were approaching the end of our shopping trip when he burst out in a loud, joyful exclamation, "Blow me!" I said out loud, "Oh my God!" (I was not swearing, I was praying. Well, maybe swearing and praying.) I hoped that it was a single, random uttering. No such luck. Josh liked the sound of what he came up with. "Blow me! Blow me!" he exclaimed over and over again, laughing like crazy. You have never seen a middle aged mom sprint so fast to the check out line with her hand over her deliriously happy child's mouth. It wasn't until much later that I saw the humor of the situation.

Life with Josh is just funny . . . chaotic, unpredictable, socially odd yet very amusing. I never thought that I would see life this way. I am a pretty serious, driven, productivity-loving second generation Asian-American mom. I like to plan things and them press forward to accomplish those plans. I feel the need to zoom through life and my check lists of things to do without much regard for enjoying the present. I'm not very good at just being in the moment. But life with Josh is filled with moments that just have to be savored.

Right now, Josh is dancing (well, walking in circles) in the kitchen singing "To the left, to the left. . ." then laughing uproariously! Who exposed this child to Beyonce? I have no idea but it's hilarious! He thinks it's pretty great as well. I love it when Josh is loving something. Life is so perfect when he is happy. And when Josh is happy, the world is a wonderful, beautiful place.
Posted by showerheads and hairdryers at 7:40 PM