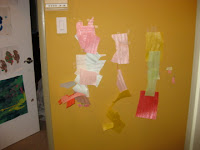 My two (neuro-typical) daughters (age 3 and 4) were having a delightful time doing a spontaneous art project today. The found some textured paper that they decided they would cut up. Then they found a stapler and had me staple the pieces together as they directed. Then, after trying to figure out if the pieces were kites, or lamps or they decided to the pieces to the wall to make a picture. The whole time, they were creating stories about their artwork, playing off of one another's ideas.

"This is the cross of Jesus but then Elmo needed to use it for his birthday party."

"Yeah, this one is a kite that is only used by ballet dancers or Elmo."

The development of the imagination is an amazing thing to watch. Their little minds were using all sorts of new data that they were processing in wonderful ways. Their brains are like lint brushes of human experience just picking up more and more information every day. And the gift that God has given them to play with and process that information is the imagination.

When I see this happening in my girls, I always feel a mixture of awe, delight, and sadness. Because I always think, "But what about Josh?" How does the imagination work for someone who has such an atypical brain? He doesn't have the tool of expressive language to practice using his imagination. How is his world supposed to get bigger and richer if he can't interact with it very much in a creative, expressive way?

One of the realities that always grieves me is the fact that Josh may never be able to read. Probably not. He has been working on learning his alphabet for over 4 years now and he still has a hard time with the first dozen letters. I think it's still worth it to try and keep challenging him but I have this growing feeling that he just might never get to the point of being able to interact with letters on a page or screen to engage him intellectually. If this is true, what will feed Joshua's inner thoughts and imagination?

They say that the autistic mind is more oriented toward the tangible and sensory. This seems accurate to who Joshua is. I've read him a million books but the characters and the narrative hold no interest for him. He only lights up when he sees a picture of something that he likes, like a bathtub or a spiral. He asks for Elmo videos because he's interested in the scenes where there are swirly pictures, not because he particularly has any affection for Elmo. What must it be like to be like this? What is it about certain songs or visuals that bring him so much joy? Does interacting on this level cause his mind to grow? Is that so important?

I guess it's through the gift of my imagination that I try to understand his very different mind. And it's by the grace of God and a mother's heart that I accept him for every bit of who he is.
Posted by showerheads and hairdryers at 10:27 PM