More about Anna and her Brother 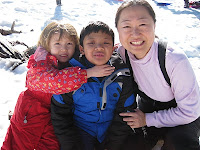 "Is Joshua always going to be special-needs?" Anna asked her question while looking out the window of the back seat of my van.

I wonder what is going on in that four year old brain of hers. How is she processing the life that she has been given to live and the family that God put her in.

"I think probably so, Anna. Why do you ask?"

"Well, is he going to get married?" (Anna has been thinking a lot about marriage and weddings. I began to be concerned about her thinking about such "big girl" stuff until she told me that she has decided that she is going to marry her Daddy.)

"I don't think that Joshua is going to get married, honey."

"Well, who will he live with when he grows up?"

"Probably Daddy and me," I replied.

"Aren't you and Daddy going to be really, really old by the time Joshua grows up?"

I can't remember how I replied but I was so struck by how such deep concerns bubble up in her developing little brain. She's so young. She still draws in stick figures. She's just now mastered recognizing the letters of the alphabet. She spends most of her time in the present, which is filled with immediate impulses and gratification.

Yet, somewhere in there, Anna wonders about her brother and his future.

Everyday there are reminders to me that Anna and her older sister, Hope are being shaped, from the very ground up, by the presence of this different little boy. I was looking through recent pictures this week and noticed that in this one (above), Anna is helping her brother to look at the camera.

Earlier this week we were at Hope's school picking up Hope and another boy who I was giving a ride home. Josh was in the back of the van screaming his head off for no apparent reason. The boy (a very polite and nice kid) had his fingers in his ears and did not look like he was looking forward to sitting in the back with Josh. The girls were already strapped into their booster seats in the middle row. While I put the other boy's backpack into the very back of the van, I saw Anna unstrap herself, pick up her booster, and settle herself into the back seat with Josh. The boy that I was giving a ride to seemed mighty relieved. Later, I asked Anna about why she had done it, whether it was out of concern for the other boy or for Josh. Anna said, "Because I love Joshie, Mommy. He's very special to me."

Oh man. Such sweetness. . . but do I start saving now for therapy for this sweet little girl who feels responsible for her brother at age 4?
Posted by showerheads and hairdryers at 10:41 PM