Helping Others Get to Know Josh 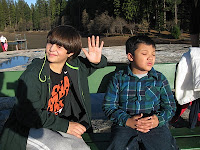 When I turned 40 years old (two years ago), I did some reflection about some goals for my 40's. What were my goals for this decade of my life? What are the most important things that I really want to have happen in the next 10 years?

I can't even remember what goals #2-5 were (probably something about losing weight and working out more-- oh well). Goal #1 was to live and arrange our lives so that we had a good number of people who knew Joshua on a deeper level.

It's so easy to miss out on getting to know Josh. He generally doesn't communicate with words. His auditory sensitivities make many social events impossible for him. He has a rather packed schedule of necessary therapies and medical appointments. He doesn't really care about socializing. His favorite thing in the world is to sit in his room and listen to music by himself. His disabilities are complex. Yes, some people remember that he has autism but only a handful know what Septo-Optic Dysplasia even is or remember that he has this primary diagnosis. There is something so inherently isolating about living with disabilities.

But I have a deep desire for people to, get to know my son. He is such a beautiful little soul. He is an incredible source of joy. He has so much to teach. You just have to have eyes to see and ears to hear. Surely, the blessing of who Joshua is is not just meant for our nuclear family?

So I've kept this goal in my heart and in my prayers-- that by the time I'm 50 years old (and Josh would be 16!) there would be a number of people, and families who have gotten to know some of the complexity, beauty and challenge of who Joshua is.

One of the things we've started to do as a family is to vacation with a couple of other families. My husband has a friend from college who generously loans us his vacation home several times a year so for the past couple of years, we go up to this cabin in the mountains with one family on MLK weekend and another family for a week during the summer.

A few weeks ago, we went up for an extended weekend with one family with whom we are long time friends. Their eldest son, Ben, is 12 and a very sweet kid. Ben has always had a special willingness to hang out with Josh. A few years ago, during an Easter Egg hunt in their backyard, Ben walked around holding Joshua's hand and helping him to find eggs. During our weekend at the cabin, we went for a lit 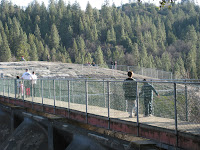 tle hike and, without prompting, Ben took Josh's hand when he sensed that Josh was feeling visually insecure about walking across a bridge. Walking behind them, I noticed this, smiled, and snapped a picture.

The other family that we go to the cabin with also has a son who is twelve, Mark. Mark's mom told me a story the other day that touched me. Apparently, a few of Mark's friends from school were talking about something or someone and saying that it was "retarded". Mark spoke up and told them, "Hey, you shouldn't use that word. Our family has a friend who has special needs and they would not appreciate you using that word like that." I mean, who does this when you are a twelve year old boy? Did I ever speak up for anyone else at all when I was twelve? I don't think so.

Somehow, my son's very presence is teaching people about advocacy and about looking out for unexpressed needs. I love this. How will their experience of knowing Joshua help these two young men to become better students, husbands, dads, bosses or church members? How will being around Josh give them a category for caring for those who are different from the norm?

I also love it when people (and especially other kids) ask me questions about Joshua, his life, and even his disabilities. I like it because it tells me that they see him and are wondering about him. I appreciate the initiative to move a little bit into his/ our world. I feel included, known, and loved.
Posted by showerheads and hairdryers at 9:06 PM