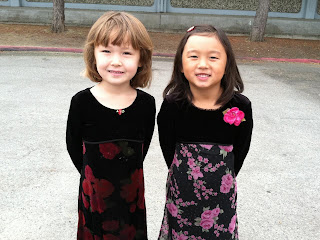 We had a funny moment today at the supermarket. The girls and I had zipped over to pick up a few items before Josh's bus was due to arrive at home. To "help" the girls to be cooperative during the short time that I had to pick up Josh's meds at the grocery store pharmacy, I gave them sugary snacks. By the time we were at the check out counter, they were very energized, outgoing and . . . effervescent!
The cashier noticed that they were calling each other "sister" and asked if they were twins. When I said, "No, they're a year minus three days apart", she said, "Yeah, they don't really look much alike". I don't usually do this but I offered the information that, "in our family, two of our kids are adopted and one is biological". Upon hearing this, Hope started loudly spouting, "I'm adopted! I'm adopted!" Not to be outdone, Anna began loudly saying, "I'm not adopted! I'm from my Mommy's belly!" It spiraled quickly into a game of who could talk faster and louder and they soon erupted into a chorus of giggles.
Adoption is pretty normal in our family. We've worked hard for it not to be a strange, secret, or shameful thing. By now, it's just a fact of life. Hope has a birth mom that's not in our family and Anna's birth mom happens to be the same person as her mom. "We're all different!" is our family mantra. Everyone in our family has a different ethnic composition. Being different is normal.
Actually, since my husband and Josh are also adopted, the adoptees are the majority in our family. Anna has had her struggles with NOT being adopted and has voiced that she wishes that SHE had a birth mom outside of our family who took her out to ice cream. I've tried to tell her that I am both her mom and her birth mom and that I could take her out to ice cream. She informed me that I don't count. (So much for 27 hours of labor and then giving birth to a 10 pound 3 ounce little girl.) She also wishes that she had an adoption agency that gave her a special teddy bear like Hope and Joshua's agency did.
I'm sure that the struggles will change over time but I hope that they will be based on a foundation of safety and security in being loved.
My girls are getting to be better friends as the days go by. Sure, they still fight and whine but they are very close. I love to hear them talking after I have put them down for the night. I listen in as they debrief their days, talk about school, and even quietly sing songs together.
They pretend to have a secret language that only they can speak or understand. They make each other laugh A LOT.
I also love that Hope and Anna share a bond with their brother. Each in their own way, they have such a natural love for their brother. Anna is often concerned about Josh's safety. Hope gets very angry if we chastise him. If we are driving in the car without him, one of them will inevitably ask, "Where's Josh" or "When are we going to pick up Josh?" He is an important part of their world, even though he doesn't do a lot of the things that another older brother might do.
I love knowing, with absolute confidence, that God has brought our little brood together. We are held together by a bond that is stronger than blood.
Posted by showerheads and hairdryers at 10:00 PM