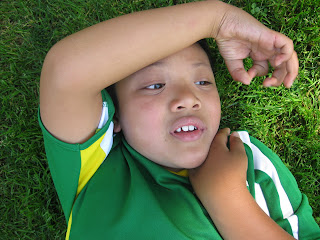 Soccer Mom. Part of me disdains that term because it makes me think of being part of a "demographic" that politicians target. I want to say, yes, I drive a minivan and I live in suburban America but don't peg me as just a "soccer mom". I'm about more than just the activities of my kids, you know. Don't define me by what my kids do. Blah, blah, blah.
However, truth be told, part of me wants to join that club. Deep inside, I WISH that I had to schlep my 9 year old son to practices and games all around town. I want to be able to complain that he "is eating us out of house and home because he's so active all the time!" as some other moms do. It would be nice to have to get to know a whole team full of other boys who run around and get really dirty and sweaty together. I would bring healthy snacks and maybe have some of them over for playdates (or is it called just "hanging out" when you are 9 years old?).
Alas, team sports is a universe away from where my son lives. Josh is still a one to one kind of guy. He needs a parent or an aide with him for any activity. Otherwise, he could wander off or spend hours walking in circles or spiral into a long session of crying and screaming.
I had resigned to never get a chance to be a soccer mom until my girls were older. Until I heard about AYSO VIP soccer. It's a branch of AYSO that's specifically for kids with special needs. I checked out the website and it said that they have individual volunteers for each kid who needs a buddy. It was also very local and free. I decided to check it out.
The first session was awesome. All of the team members got free, bright green, matching uniforms. The older special needs kids have been doing this for many seasons and had a lot of enthusiasm and team identity. After warm ups, they began with a team cheer, "Ho, Ho, Ho Green Giants! Yeahhhhh!!! " Several kids with Downs Syndrome were ablaze with excitement and enthusiasm, bursting out in cheers at random times. One kid was completely blind but ran around chasing a ball with a beeper with a buddy with him at all times. It was actually pretty inspiring and beautiful.
Josh was not thrilled or motivated but he was willing to go with it. His vision is good enough to see a soccer ball, though probably not good enough to want to run around chasing it. He got paired with a volunteer lady with a crazy "can do" spirit who patiently got Joshua to kick that ball around quite a bit, even dribbling around cones for a bit. He whined the whole time and kept asking to "go for a ride in the car" but he did it.
However, the next times were not as good. He got paired with other buddies, sometimes kids who were not much older than he is, who did not "get" him or how to work with him. My husband works on Sundays so I had my wiggly girls along with me. At one point, I had taken my girls over to the playground on the other side of the park for a bit. When I returned, Josh was laying on his back, screaming and kicking anyone who tried to engage him or be near him. His buddy had clearly had it and looked very panicky. No one knew what to do.
It was at that moment, that I realized that soccer, even soccer for special needs kids, was not going to work out. Sometimes, things just don't work out. Kids don't fit into neat templates of what a lot of other kids do at their age. Activities are supposed to challenge but not torture our kids. The fact that I had done reams of paperwork to register for AYSO VIP soccer does not mean that he has to keep doing this thing that he clearly did not enjoy. My fantasy of being a normal soccer mom does not get to determine what Josh's activities will be. We tried it. It didn't work. That's ok.
I packed everyone up and took everyone to the closest coffee shop. The kids were thrilled to each get a cup of ice water and a straw. (Sometimes, it really doesn't take much, to make these people happy.) I splurged on a very large latte for myself. We went to another park to play in a more relaxed context. I took some pictures of my beloved boy in his cute soccer uniform, knowing that it would be the last time he wore it. Maybe we'll try Special Olympics track and field next. 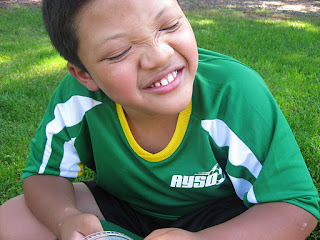 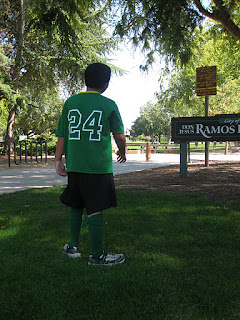 Posted by showerheads and hairdryers at 11:08 AM