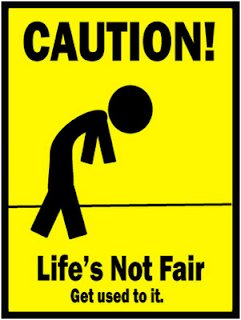 That was the absolute last time I could bear to hear that phrase today.  I couldn't stand the sound of those three supremely annoying words.  It had become a constant mantra around our household, like a breath prayer to an unjust authority (me).  I instituted a new rule on the spot.  Those who utter that phrase of abomination will have an automatic time out; a long, serious time out.

I suppose our situation is rather well set up for people to be sensitive to the injustice in every interaction.  I have two super competitive girls who are less than a year apart.  One is adopted and one is biological.  They are both external processors.  They compete and compare about everything. . . out loud. . . usually with a whiny voice.

"Can I sit behind you, Mama?"
"She got more mac and cheese!"
"Why doesn't Anna have to take Benedryl?"  (Because she doesn't have a rash, Hope)
"I read that book first!"
"Her carrots are smaller than mine!"
"You spent more time snuggling with her!"

Little statements made by little girls were killing me like a million paper cuts.  It especially makes me crazy on days where I am facing the constant hurricane blast of the many needs of the little people in our household.

Tonight at dinner, the complaints were fast and furious.  Hope came up with three things that struck her as highly unfair in rapid succession.  I took a deep breath and continued doing dishes.  Then I decided to go for it.  I used the "Special Needs Card".

"You know, Hope, I struggle with feeling like things aren't fair too.   Other moms have sons who are normal and can do normal things.  Sometimes I feel like it's not fair that Josh has special needs and other kids don't.  Sometime that feels really unfair to me.  But you know, I realized that it's going to be ok.  God gave me Josh and he's the perfect boy for me and for our family and we love him, right?"

I am not kidding you but she took about 15 seconds to think about it and she said, "You know, you're right Mommy."  And then she went and got herself some water, took her dishes to the sink, and buried her nose back into her book.

A strange, quiet calm settled into our house for just a few minutes.  I stood there in grateful awe that the conversation seemed to have had a good effect.  Then I turned my head to see a naked Josh coming to me.  He had gone to the bathroom and attempted, quite unsuccessfully, to wipe himself.  Back to work, Mommy!

Later this evening, while I was giving Hope a bath, she asked me, "Mommy, why did God give you a child with special needs?"

My brain was running on low by this time of the evening so I absentmindedly said, "Uh, maybe God thought that I could handle it" while I concentrated on shampooing her head as quickly as I could.  "Why do you think God gave me a child with special needs, Hope?"

She thought about it and then said, "I think it was so you could feel His love by loving Josh."

"I think my answer was better than yours."

Posted by showerheads and hairdryers at 7:19 PM