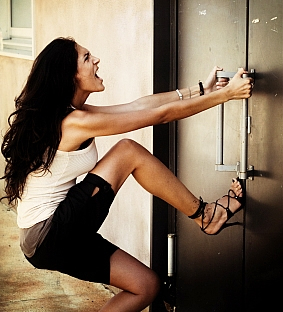 This week I had a number of frustrating phone calls and interactions with service providers who are supposed to be providing services to Josh but do not or do not provide it well.  Rude or irritating comments made by various people that I talked with this week are still bouncing around in my head:

"I'm sorry but you missed the deadline for that program.  I thought I told you about the deadline the last time we talked . . ."

"I thought I already called you back about that."

"This isn't the right department for that inquiry."

"Ma'am, I'm just not allowed to tell you any more about that."

"That program is no longer funded."

By the end of the week, I just wanted to scream from all of the pent up frustration from dealing with bureaucracy.  I mean, do they intentionally stack these organizations and governmental departments with unhelpful people on purpose to make already stressed out people like me feel even more stressed?

I consider myself a decently bright person with a lot of drive and persistence but sometimes I just want to give up when I face such tension producing interactions.  I  know that a lot of parents of kids with disabilities feel the same way.

As I've been battling the systems and paperwork that are involved in my job as a mom of a child with disabilities, somewhere in the back of my mind, I've been thinking about another woman in the Bible who was dealing with the many needs of her family and a more than frustrating system that was not serving her well. In Luke 18:1-8 Jesus talked about a widow who was desperate for justice.  She kept going to a judge, the face of the current governmental system that she had to work within, to seek to have her needs met.  According to the passage, this judge who "neither feared God nor had respect for people".  In other words, he didn't really care about doing the right thing or about helping people get their needs met. Yet, because of her persistence, he decided to grant her request, presumably because he was just sick of dealing with her.

Jesus tells this strange little story and then asks, "And yet, when the Son of Man comes, will he find faith on earth?" Apparently, this persistent widow is an illustration of the kind of faith that He is hoping to find when it's time to really see who is a person of faith and who is not.

Jesus affirms this kind of persistence.  In fact, He seems to equate it with "having faith".  I don't think that this means that Jesus wants to His followers to be annoyingly driven, demanding people.  But, there is an insistence on hoping for something and working toward that hopefulness that I do hear in Jesus' teaching about this woman.  Through this story, I hear Him saying, "Don't give up.  Keep asking."

These are a few thoughts about persistence as I consider this passage:

1)    Being persistent means sometimes skating on the edge of being annoying.  I think that sometimes, I avoid asking for things again and again because I don't want to be seen as demanding or out of touch or desperate.  But, you know what?  Sometimes you just have to not worry about how you appear and focus on doing what you need to do.

2)     Being persistent is risky.  It's easier to give up because, then, you don't have to face the pain of things not working out or the frustration of things not working out for a long time.  It's easier to not hope for something than to go on hoping and wanting something but not being confident that you'll get it.  Yet, despair is no real solution and the best option is to keep putting yourself out there.

3)     We should especially be persistent about asking for things from God.  At it's core, this story about the persistent widow is not a teaching about activism or a "how to" on navigating bureaucracy.  It's about prayer and being persistent in asking for what you need from God.  This is a good reminder to me that the state that I live in does not ultimately meet Joshua's many needs.  God does.  I have to work it out with God.