Enrichment and the Josh Factor

The other day, I was trying to schedule a playdate for my 7 year old daughter with a friend from her class at school.  The conversation went like this:

"Oh, Monday is Jenny's voice class rehearsal.  She can't miss because she has a performance this weekend."

"Hmmm.  Tuesday is Girl Scouts then skating . . . and I know that we both have Mandarin after school on Wednesday."

"How about if I drop her off after piano on Thursday?"

"Darn, we have something on Friday afternoon this week.  How about next week?"

I live in a community where many of the children are engaged in dizzying array of "enriching activities".  The city in which I live is fairly affluent and filled with highly talented and educated people.  We also attend a school where the majority of the parents are really involved in the school.  The result of such realities is that parents are highly invested in the enrichment of their kids.  It is not uncommon for children to have at least one enriching activity every day of the week.

Foreign languages, sports, social clubs, music lessons.  These things often begin in kindergarten and only get more intense as kids grow older.  By the later elementary or middle school years, many kids choose into a more high level, competitive version of their activity such as travel teams for sports or city orchestras.  In order to get there by, say, age 10, the child has to begin those activities (with some amount of commitment and focus) by early elementary school.  The other day, Hope said to me that she wanted to become like Gaby Douglass, her hero.  I had the cynical (though unspoken) thought, "It's too late for you, kid.  You're already in first grade and you don't even take gynmastics lessons."

I'm definitely not immune to the temptation and the allure of lots of enriching activities for my kids.  Who doesn't want their child to be multi-talented and super skilled?  Besides, music, sports, languages . . . these are good for brain development and emotional health, right?


Yes, but the result can be a culture of very entitled and exhausted kids.

The other day, I heard one kid from my daughter's class say with a sad frown on his face, "I don't want to do basketball and baseball.  I'm doing too many sports."  We've all heard about kids who have acquired a lot of skills but haven't had the time to just lay around, be bored, and be forced to be creative.

But here's the thing that I've realized.  My girls have a secret weapon to battle the culture of over-scheduledness and over-enrichment: their brother.

The reality is that Joshua simply cannot handle a complicated schedule.  I have tried dragging Josh along to take the girls to mid-week swimming or gymnastics lessons.  Honestly, it's a gamble.  There are days where he is relatively compliant (especially if I bring along plenty of snacks).  However, there days when he will get completely upset and throw a huge tantrum in lobby of the YMCA.  Or there was also the day at the library when we were taking too long so Josh went up to a random middle aged lady and slapped her on her bottom.  (She was pissed and didn't speak enough English to understand my frantic explanation.)

Josh also has more than his share of doctors appointments, which the girls often have to come along for.  Finally, Josh has autism therapy at home several afternoons a week which means that we can't leave the house.

So, the reality is that my girls do far fewer scheduled activities than most of their peers.  They do not play piano.  We have never gone ice skating.  We choose one sport a year.  There have been many days where I feel very guilty about this.  However, today, I am realizing that this is a blessing.  The highlight of our afternoon today was sitting around and eating popsicles in our driveway.  We greeted people who walked by and enjoyed watching Josh walk in circles.  We read books and checked to see how our pumpkin seedlings are growing. Hope and Anna are very good at making up stories while playing with mud in the backyard.  They also play games like "squashing up ladybugs to make jam" (a pretend game).  It's not super duper "enriching" but I'm trusting that this is the reality of the life that God has given to us and it's good. 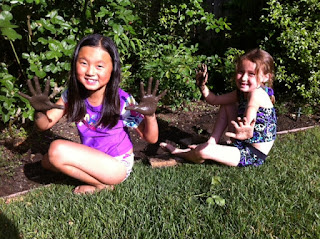 Posted by showerheads and hairdryers at 9:59 PM