Josh Has a Friend 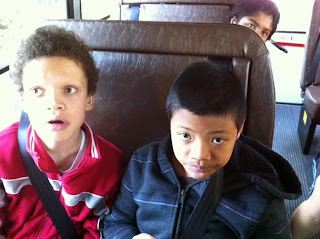 Never, in his 11 years of life, has my son been even remotely interested in having a friend.  Josh has always been more of a "parallel play" kind of kid rather than someone who could relationally interact with his peers.  Actually, Josh doesn't really "play" in the traditional, imaginative sense so it's always been more of a question of whether he'd tolerate being around other children. On any given day, it's hit or miss whether he can even name which of his sisters is Hope and which is Anna.

Of course, Josh has lots of people in his life.  Thanks to his school, our church, our extended family and a gazillion therapists and service providers, there are tons of people who appreciate Josh, care for him deeply and work for his growth.  He is very bonded to his dad and me.  When he is hurt of upset, he will say, "I want Mama."  When he wants to snuggle, he will ask for his dad.

This morning, as I was helping Josh into his seat on the school bus, I realized that he always chooses to sit next to Vincent, who is a 7th grader in Josh's special education home room class. There are plenty of empty seats and even empty rows but he always finds this same kid, sits down, and waits for me to help him with his seat belt.  Maybe he feels safer with Vincent than with the other kids, knowing that Vincent is less likely to make random sounds that are sensorily challenging for Josh?  Maybe he just likes Vincent.  I don't know.

I don't know his official diagnosis but Vincent seems like he's also an autism spectrum kid but with more verbal skills and physical agility than Josh.  The other day, when Josh plopped down next to him, Vincent put his arm around Josh and said to me, "Josh my friend."  This both made my day and made me want to cry at the same time.

Yesterday, I observed their class while they were doing some outdoor play in the grass near their classroom for a quick break.  Several of the boys were kicking a ball around.  Vincent kept insisting on kicking the ball to Josh despite Josh's complete disinterest in receiving, kicking or chasing the ball.  Josh was more engaged in flicking his fingers in front of him and making humming noises but this didn't deter Vincent one bit.

Noticing this small sprout of a "friendship" between Josh and this other boy, who is a peer, touches me.  I've always been sad at the thought of Josh not being able to develop friendships in a traditional way as, in my world, friendships are one of life's great pleasures and God's great mercies.  To me, life feels barren without the sense of being seen, liked, chosen, and enjoyed by someone who is like ourselves in many ways.

What does it mean for a child who has autism and intellectual disability to experience friendship?  I don't know but, today, I feel filled with hope by seeing this little connection.
Posted by showerheads and hairdryers at 12:22 PM