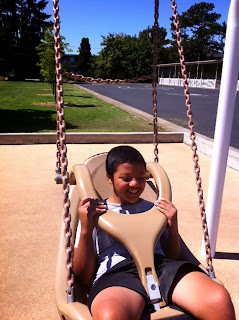 A few weeks ago the kids and I happened to visit a park in town that we hadn't been to in a while.  To our surprise, the city had replaced one of their regular swings with an adaptive swing, one intended to give more support to a child, likely one with some sort of special needs.  Josh found his way into it and immediately started smiling and laughing.

His sister pushed him for a while and when she stopped, Josh said, "Want more push."  Between his two sisters and I, we must have pushed him on that swing for at least 30 minutes.  Each time we stopped, Josh asked, "Want more.  Want more." He requested with such a sweet cackle/ giggle that we couldn't say no.  We were pushing him higher than he's ever swung before and he was just loving it, laughing loudly like a lunatic the whole time.

When we finally stopped to rest, I realized that, while Josh loved swinging when he was younger, he hasn't been a fan of playing on swings for quite a long time.  We have a park near our house that only has regular swings and he never wants to be on it, preferring to sit in the sand and watching the sand pour through his fingers instead.  It's been years since I've pushed this kid on a swing.

Why, then. did Josh want to swing on this swing so much?  And why was it making him so darned happy?  Why was he willing to take a risk to let us swing him so high?  It dawned on me that, due to the shape and design of this adaptive swing, Josh felt secure in it.  He is quite sensory seeking so he loved the proprioceptive input that he got from a swing. However, because of his low tone and poor core muscles, I think that he feels insecure about being swung and having to hang on for himself.  But with the extra support of this adaptive equipment, he could relax and just give himself to the experience of swinging.

This observation made me think about how there might be other ways that Josh might be willing to take new risks if he had more support, specifically, a better sense of feeling secure.  Might Josh be willing to roller skate some day if we figured out a situation that worked for him?  The very thought of it makes me laugh out loud!

I also found myself thinking about some of the ways that I might be willing to take new risks or enjoy a certain activity if I had more support in some way that I feel insecure.  For example, might I do more writing if I had the equivalent of an "adaptive swing" in my life?  Could I fly higher in some way, laughing as I went, asking God or my community or a mentor that I "want more push"?

How about you?  Is there some way that you have been avoiding something wonderful because you feel insecure?  How might you seek out an "adaptive swing" experience?

Posted by showerheads and hairdryers at 9:19 PM