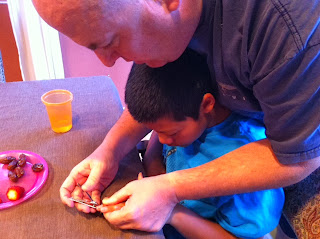 "Today's the day," Alex announced as we were getting ready for school.  "It's time to cut Joshie's nails."

My daughters and I groaned in unison.  We all hate it when this has to happen.  When we engage in the massive challenge that is cutting my son's fingernails, we have to shut all of our doors and windows first because he screams like we were torturing him. I have thought about visiting our neighbors and interpreting for them what is going on so they don't call Child Protective Services but I figure, they already know Josh and have heard plenty of his strange sounds.

This is a child swallows 12 pills every day, gets an intramuscular shot every morning, gets a blood draw done every month and handles all of these things maturely and peacefully, like they are just a fact of life.  When we go to the pediatrician's office to get flu shots, it's my autistic child that I am least worried about.  Josh obeys my requests better than any other child that I am currently parenting.  He even sometimes does his chores without my having to ask!  Generally, these days, Josh is a sweet, compliant kid until we take out the nail clippers.  Though legally blind, Josh can see the little silvery tool from a mile way and he immediately starts yelling "NO! NO! NO! NO! NO!" Suddenly we become evil, untrustworthy parents who are intentionally trying to inflict great pain on our child.

But what can we do?

The thing is, Josh's nails grow faster than any one's in our household.  Maybe it's the growth hormone shot that he gets every day.  You blink and his nails look like Marilyn Manson's.

Also, Josh has no qualms with putting his hands anywhere then into his mouth or nose.  Josh went through a season where he loved to caress public garbage cans (where he would find pre-chewed gum stuck to those garbage cans and stick it in his mouth).  A few months ago, Josh and I were walking to pick my girls up from their school.  As we walked across a grassy area, and as I was distracted by chatting with another parent that I knew,  he felt that he needed to scratch his groin so he just pulled his pants and underwear down and did what needed to be done.  By the time I reached him and quickly pulled his pants back up, he had already moved on to picking his nose.  He's a strange kid but I love him.

I have Josh wash his hands a lot but suffice it to say that keeping Josh's nails trimmed is part of what we have to do to minimize the grossness of our lives and of our household.

And let me tell you that we've tried it all: cutting his nails while he sleeps, clipping after long bath, promising great, sugary rewards. Nothing works.  At some point, we have to bite the bullet and cut his nails.

Now, the level of strategy that this endeavor entails might rival any NFL game or great, historic battle.  First we discern which room in our house has the best light.  Then, my 6 foot 3 inch tall husband has to put his strength into holding him down without hurting him while I try to cut with speed, agility and accuracy.  Josh is 107 pounds now so he's quite strong.  Alex and I end up often sweating, usually swearing.  Sometimes we go the extra mile and do the toes but the priority is the fingernails.

Hope usually ends up weeping because defending her brother is one of the strongest impulses in her 7 year old life.  She knows that we are not hurting him but she can't bear to hear him scream.  When Josh's screaming gets really bad, Hope gives us the stink eye and tells us that we are bad parents.  Anna goes into another room and buries her head into a book.  I picture my girls having to debrief this scene with a therapist years from now.  I'm just trying to do what's good and healthy for my son but it just creating so much tension and conflict for everyone.

Sometimes I wonder if this is what God experiences with me when he is trying to wrestle me into some sort of cleansing or pruning.  As I look back on my life, there are so many things that God has had to regularly strip me of so that I can have a healthier life.  Toxic relationships have had to be severed.  Bad patterns of negative self talk has had to be regularly clipped off.  Addictions have had to be cleaned up.  I know that, were it not for God's loving intervention, parts of my life and soul would be blacker and grosser than the inside of Josh's nails when it's way past time for clipping.

And how have I responded?  Sometimes, I feel like I writhe and scream as much as Josh does.  I yell at God that it's going to hurt. I ask why He is doing this and I accuse him of being a bad, bad God for doing these things to me.  Unexpected transitions, unmet expectations, aberrations from the usual societal norms, these things have all felt scary and threatening to my human sense of what is safe and okay.  Yet there are times when God has drawn near, held me down and said, "Sweetie, it's time.  We're going to do some cleaning up today because I love you and I want good for you."

Strangely, this morning we experienced a true miracle.  Alex got out the clippers and Josh remained calm.  It was clearly still hard for him.  He still tensed up when we started but, as the picture above shows, it was the first time in years that clipping nails was a one parent job.  There was no screaming, kicking or having to hold him down.  He just sat in a chair like a normal person and waited until the unpleasant task was finished.  It feels like Josh just woke up one day and decided to trust us.

I wish I could experience this type of miracle in my own heart towards God.  When God does something in my life that I don't understand or that I fear, I want to experience a supernatural, miraculous ability to trust that He has my good in mind and that He loves me.  I want to stay calm where I used to resist.  I want to be able to sit still and let my Father who loves me come close to me and help me with my personal spiritual hygiene, no matter how yucky or intimidating things may be.

Posted by showerheads and hairdryers at 8:26 PM