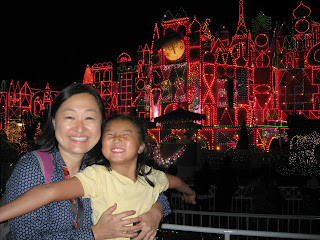 I've noticed that the magic moments in life are only magical if they are framed and taken out of the greater context.  For example, this photo of my daughter Hope and me captures a truly "Disneyland magical moment".  Leaving sister Anna and Daddy on Main Street to nab a good viewing spot for fireworks, Hope and I raced to the back of Fantasyland to take in the "It's a Small World" ride.  The day we had chosen to be at Disneyland happened to be the first day of the month-and-half long holiday season in the Magic Kingdom so Small World was decked out in holiday lights and featured some special outside shows while you wait.  Our expected 25 minute wait was cut short when they opened a new loading line, allowing us to get right onto the coveted front seats after standing in line for only about 5 minutes. Yes!  Hope had already been on this ride earlier in the day with her dad so her fear of the unknown had melted away and her enjoyment of the ride was exponentially greater.  She jabbered on throughout the whole time guiding me through all of her favorite parts.  (It turned out that every room was her favorite room.)  As we snuggled together and took in the sights, Hope sighed and said, "I love you, Mommy."  It was a scene straight out of parenting heaven or a Disney advertisement.

Soon after we exited Small World, the fireworks started.  We watched them from where we were, which was not a bad location, although not the supremely desired "right in front of Sleeping Beauty's castle" spot.  It was Hope's first time actually seeing live fireworks as we've never let our kids stay up long enough to watch them in July.  They were pretty marvelous to behold, filling us with a sense of awe, beauty, power and just the right amount of fear, sort of like a really good experience of God.  As the fireworks show came to an end, the Small World mall starts to "snow" little snowflakes made of some sort of soap-like substance as the song "White Christmas" and the sound of jingle bells were heard throughout the park.  Hope was absolutely elated, her delight expressing itself in a twirly dance as she caught the little white bits of joy her hands.

Yes, except for the fact that a few hours before this magic moment, I almost threw up in the midst of an  everlasting, claustrophobic line of people at the Jungle Cruise attraction and had to lay on a bench on Main Street in the fetal position for 2 hours while Alex and the girls went around together.  Alex, Hope, and Anna had had a bout of stomach flu or food poisoning a few days before our trip and, while it looked like they had completely recovered (enough to down several hand dipped corn dogs each), I feared that maybe it was my turn to have a tummy problem.

Disneyland is not for the faint of heart.  It seems that moments of irritation, being overwhelmed and snapping at the ones you love are givens at some point in a long day in the Magic Kingdom.  During my fetal position rest time, I overheard many a parent completely losing it on their beloved children.  I heard many a child having complete thermonuclear meltdowns even though they had been given $15 balloons to hold and larger than life sugar-based snacks.  Disneyland may be called "the happiest place on earth" but it's also a place where the dark side of the human heart leeks out at some point or another.  We were not immune to that reality.

And the clincher was getting a text message while I was watching Hope dance in the manufactured snow from Josh's caregiver (back at home) that Josh was spiking a fever.  Subsequent texts and phone calls confirmed that not only did he have a fever but he was throwing up as well.  As I've written in previous blogposts, this can mean emergency hospitalization for Josh if he is not able to keep his meds down.  I immediately knew that it was not an option to let my carefully organized "Josh care team" deal with this level of complexity without me there so I caught the first flight that I could and returned home the next morning.  I left Alex to shepherd the girls through the second day of our Disney adventure.

A part of me is tempted to say to God, "Really?  It seemed like such a good thing to take this vacation with just the girls.  I thought through this trip from about a billion angles.  I spent about 50 hours prepping for this trip.  There are seven pages of instructions that I typed out and posted on my fridge for people to use as they take care of Josh.  Of all of the days that Josh could have a fever and throw up, he has to do it at the end of our first of two days at Disneyland?"

But you know what helped my heart?  I came home to this. 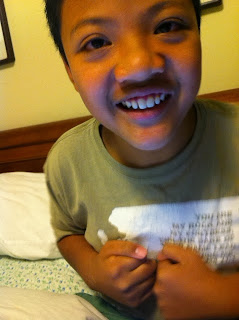 My deep thought of the day is that if you want to experience joy and wonder, you can't expect it to come on a full day of complete perfection and happiness.  You have to accept that it will be a 3-7 minute snapshot in the midst of the realities of normal life.  It will be a twirly dance in magical snow an hour after laying on a bench in the fetal position and a few minutes before hearing that your other child is seriously ill and you need to get your butt onto the next flight home.  That's how most moments of joy comes in this world, in small packages.  If you focus on the negative stuff, you will never savor the good stuff.

I don't know the full meaning of why our vacation went the way it did but I do know this:  I love this boy and I would do anything for him.  I'm glad that I came home and we are having a quiet, restful day together.  The fever and vomiting are gone but he's clearly tired and needy.  I'm feeling tired and needy too and I'm not sure I would have been able to keep up with Alex and the girls on this second day given where my stomach is at.  Snuggling with Josh on my bed is also a magic moment and it's the one I've been given for now.

Posted by showerheads and hairdryers at 6:30 PM