Snapshots from the Short Bus 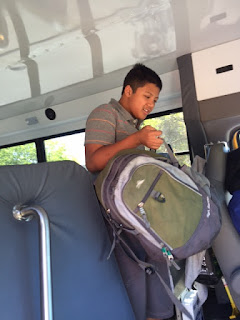 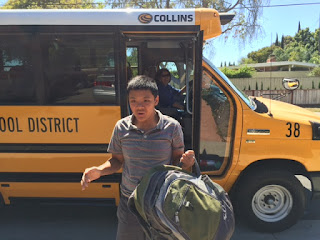 For years I’ve been so preoccupied with getting Josh onto or off of the bus that I have rarely paid attention to the other kids who ride the bus with him.  We live on a busy street with two elementary schools on it so the morning and afternoon bike and car traffic is pretty intense.  I’m aware that there is usually a line of people behind the bus waiting for me to load or unload so I try to move quickly.

Most of the kids who ride the bus with Josh are not easy to get to know, especially when you don’t have a lot of time.  Many are non-verbal and do not make eye contact.

For example, one boy never, ever looks up, even if Josh sits near or next to him.  He always has his eyes closed or seems to be looking out the window at nothing in particular.  In over two years of being on the bus with Josh, I have never heard him utter a word, much less try to interact with anyone.  One day, I was surprised when he handed me an envelope on which he had written Josh’s name in shaky letters.  It was an invitation to his birthday party.

I moved heaven and earth in our family schedule so that Josh could attend this, his first “drop off birthday party” for a peer at school.  When we arrived at “Bill’s” home, Bill greeted us at the door with absolutely no affect on his face.  However, his mother greeted us warmly and told me that her son had really, really wanted Josh to come to his party.  Apparently, he has a great affection for Josh and often tells his mom about how Josh seemed to be doing, like if Josh cried on the bus or if he sang along to songs being played on the radio.

The party was a sweet gathering of 10 young teens mostly from the other special ed. class at Josh’s school that is comprised of slightly higher functioning kids.  Bill’s mom assured me that she and her husband could handle Josh if I left for a few hours.  I did and came back slightly earlier than I said that I would.  I found Josh to be a picture of contentment, happily eating his fourth piece of pizza and humming to himself in the sun.  Apparently, they had played a game where you look for hidden pieces of candy in the garden and he had done quite well.  (My visually impaired child always seems to have excellent vision when there are treats involved.)  The other kids were occupied with riding or analyzing the zip line that they had installed on their property.  I was struck that Bill and his friends were sucking the marrow out of the moment together in their own autism spectrum kind of way.  Bill seemed very energized yet relaxed.  He buzzed back and forth between his other friends and Josh, expressing in his own way that he wanted Josh to be happy.

As I chatted with Bill's mom and just watched him work the crowd, I realized that Bill is a young man with a rich, beautiful, engaged life, which you would never know from just observing him looking catatonic on the bus (when he is probably tired and uncomfortable).   Apparently, he has all sorts of passions and interests such as VIP baseball (for kids with special needs) and ballroom dancing.  I wonder how many other times I make false or shallow assumptions about kids just because they initially present differently from neuro-typical kids.

The other day, I took a moment to ask a girl who has ridden on the bus with Josh for a long time how she was doing.  She smiled and told me, in her halting way of speaking, that she really, really wants Josh to go to the next school dance and that she noticed that his sister’s haven’t been coming out to get him off of the bus as much as they used to.    She even remembered Hope and Anna’s names!

I laughed out loud with surprise and joy at how sharp this little girl is and how much is going on in her head.  I saw for the first time that she, too, is a complicated, beautifully-minded person.  There is so much beneath the first layer of what one can see or experience with kids like this who ride the special ed. bus.   Far from being “simple” people, kids with intellectual disabilities are just as dimensional and profound people as anyone else.  It’s just that you have to be even more patient and observant to access it.  I’m so grateful that Josh gets to “be in community” with these complex and wonderful kids who are much more than what they seem.
Posted by showerheads and hairdryers at 10:49 PM