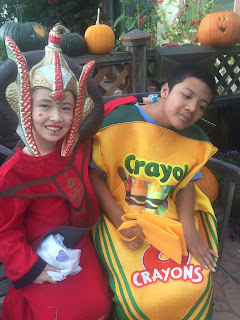 I’m as desperate as the next mom for my kids to get along.  My girls are one year minus three days apart and pretty competitive for airspace and attention so I pretty much pray desperate prayers every day for their relationship.  But I have a special hope that my girls will love their brother in a free and unburdened way when they grow up.  After all, God willing, their relationship with him will last longer than mine.  I realize that every family is different but here are some things that I am learning about how to help foster love and bonding between typically developing kids and a sibling who has special needs.

1       Create and reinforce a culture of snuggling.

When my husband and I became adoptive parents, we were taught about the significance of “skin on skin” time to bonding so we tried to maximize touch and hugs whenever possible.  In the early days after we brought our adopted babies home, my husband used to rip off his shirt whenever he could and hold them close to his chest.

Nowadays we try to get some time together in jammies as a family on Mom and Dad’s California King sized bed as much as we can during our precious, lazy weekend moments.  Sometimes we read quietly.  Sometimes someone will read a book aloud.  Sometimes Josh will request a song that we sing part of and he sings part of like "He'll be coming 'round the mountain . . ." or "This little piggy".  Josh will ask to sing or say it over and over until I have to put a stop to it in order to not lose my mind.

Being autistic, Josh has a limited tolerance for being around other people, especially when the girls were more wiggly and vocally eruptive.  But Josh appreciates the sensory input of this kind of family time.  He loves having his head and face rubbed and getting to smell his mama’s hair so he’s willing to be us for short periods of time.  Whole family snuggle times are some of the happiest times in our life together.

The other day, Hope and I woke up inexplicably early and so we decided to invade Josh’s bed to snuggle with him.  Touch is a nice way to connect, especially with a mostly non-verbal person.  After a few blissful minutes, Hope said to me, “You know what, Mama?  When I grow up, I want to marry someone who can help me take care of Josh.”  I told her how much I appreciated that and that I expect that there will be a lot of people in Josh’s life who will help to take care of him. And then I smiled and almost cried for the rest of the day.

My husband and Hope were out of town for Halloween this year so it was just Josh, Anna and me left at home to take on trick or treating.  We had plans to walk around our neighborhood with one other family.  Everyone had been prepped with the knowledge that Josh might not make it walking around in the dark with crowds of other people around.  Indeed, he lasted about 7 houses before having a major crying, screaming meltdown on the sidewalk.  (He was unhappy that I wouldn’t let him eat every piece of candy immediately upon receiving it.)  The other family graciously offered to take Anna with them while I walked Josh home.  Anna was very motivated to stay on the mission of pursuing a more ample stash of candy so she was willing to go without me.

Later, at bedtime, I asked her how she felt about Josh’s public meltdown and having to trick or treat without a parent with her.   Her emotions were complex and layered.  It was good to get to talk about the evening in retrospect.  In the end, she seemed to come to a place of satisfaction and declared it the “best Halloween ever”.  I think that getting some space to talk about how it was for her enabled her to ultimately focus on the good parts and let go of the bad parts.

3      Try to give each child their own special times.

I am aware that Josh and his needs invade a lot of Hope and Anna’s lives.  They have both spent more than their share of their lives being schlepped along to Josh’s medical or therapeutic appointments.  There are a lot of things that our family can’t do because of Josh.  Their brother often takes more than his fair share of their parents’ attention.

I have found that it’s important for my girls to each have special time where they get to have our undivided, undistracted attention.  For example, this year each girl got to have their own small birthday parties (In the past we’ve had a larger, joint one because their birthdays are so close together).  Significantly, their brother did not come.  He would not have enjoyed Anna’s soap making party or Hope’s movie watching party anyways.  But the critical piece was that I was able to fully focus on the birthday girl each time without needing to make sure that Josh was not overwhelmed or eating non-food items when we weren’t watching.

For the past two Easters, the girls have received gift certificates in their Easter baskets for a special overnight with one parent at a local location of their choosing.  This has been a special way to get to have experiences that the five of us could never have because of who Josh is.  Anna and I went to a small amusement park about an hour away.  Hope and her dad explored Alcatraz in San Francisco.  Both trips were definitely good deposits into the love tank.  Both sets of us came home with a sense of overflowing with stories and affection to spare and share.

Well, those are a few of my ideas thus far in our journey.  Do you have any other suggestions for us?  We are eager to hear your ideas and stories. 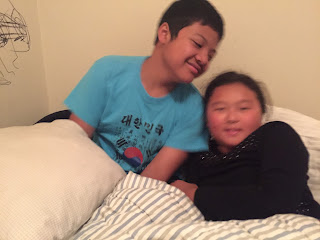 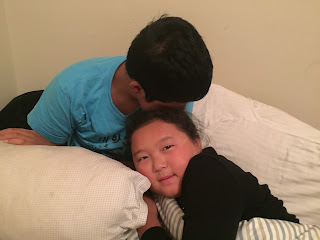 Posted by showerheads and hairdryers at 10:55 PM