Abortion, Cocaine and Such 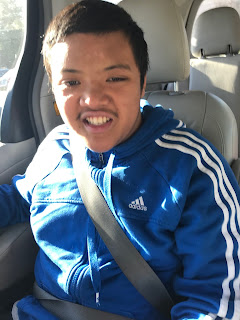 I think I might have solved a long standing mystery in our household.  As I mentioned in my previous blog post, Josh has a habit of repeatedly speaking out a word or phrase which he takes a liking to.  We are guessing that he doesn't speak the word for what it means to most of us but he likes how it sounds.  Sometimes they're nonsense words that he's made up like "recordian".  Oh how he loves to say that.  I'll walk into his room and he'll be saying, "recordian" and just savoring the sound of it with a sweet smile it like he's had some fine wine or gourmet chocolate or something.

One of his favorite real words is "abortion".  He seriously says it all the time. A new word which Josh is fond of is "cocaine".  It's both annoying and disturbing to have him say these words over and over and over again.  They're not lovely words.  I don't like that he says them and I don't know where he got them.

Starting about a year ago, he'll say a word or phrase aloud and then he will keep saying it until we say it back to him.  Maybe it's his autistic way of being relational or interactive but it sure doesn't feel very relational from the neuro-typical side. And if we don't say it back to him, he'll keep saying it with more volume and intensity until one of us breaks down and finally says the word just to get him to shut up, especially if we're in a car together.

"Hey, I thought we weren't going to say it back to him!"

"Yeah, we need to break him of this pattern.  It's so annoying!"

"I just can't stand it anymore.  I just need him to stop."

You get the picture.  Anyways, today I walked into his room where he was listening to the radio and caught the tail end of someone sharing a testimony on the Christian radio station.  The person was sharing about how he used to be a major cocaine user until Jesus came into his life and now he's sober.  Oh. My. Goodness.  That's it.  Josh has been picking up these words from CHRISTIAN FREAKING RADIO!  I bet that's where he got the word "abortion" as well!  Ok now.  How can I fix is little CD player to not be able to play Christian radio?  And no rap stations either.  That might be where he's getting all his swear words.

Posted by showerheads and hairdryers at 7:37 PM