Five Blessings and a Bummer During Quarantine

Like most parents, Alex and I are struggling to create some sort of routine for our kids during this time of "sheltering in place" during the 2020 coronavirus pandemic.  I think that all of us are disoriented and stressed.  But do you know who's not disoriented and stressed?  My 17 year old son, Joshua.  He has no idea why we stopped going to school but he seems to be quite cool with it.  School ended a week ago and our household is just barely starting to achieve some semblance of a new structure.

Mostly, Josh gets to hang out in his room listening to music and drawing which he's happy to do.  He takes long baths and goes for at least one walk around the neighborhood every day.  Sometimes, we drag him around to the grocery store or to get pet food.  As long as he has some snacks, he's very chill about running errands.

Today, I was struck again about what a blessing Joshua is.  Here are five things that I have enjoyed about Josh and one thing that I didn't enjoy:

1) Josh has become a good walking buddy.  When he arrives at a street corner, his years of orientation and mobility training kicks in. Josh says quietly to himself, "Look left, look right.  Safe to cross." Then he takes my arm and crosses the street.  It's the sweetest thing ever!

2)  Josh wakes up happy and hungry.  Whereas my other teens have a proclivity to sleep till 11am or noon, Josh wakes up between 7-7:30 am everyday.  I hear him rummaging around in the kitchen and fear of him pouring my sugar canister all over the floor wakes me up in a jiffy.  Once up I decide to make myself a cup of coffee and then I am rewarded with a quiet couple of hours.  Josh has a couple of pieces of toast and some frozen smoothie cubes then he retires to his own room.

3)   Josh is unbelievably happy in the bathtub.  He loves the sensory input of water and our babysitter recently bought him this bath toy which he finds to be a never ending delight.  ("It's like a shower head!!") I am not kidding, Josh can take a three hour bath and make happy noises the whole time. 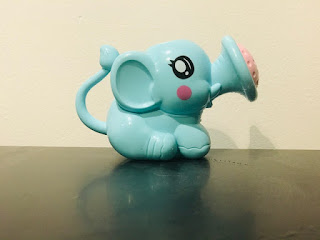 4)  Josh comprehends that if he wants to use my phone for 5 minutes to watch a YouTube video he has to work for it. 5 minutes with my phone equals at least three chores.  He's actually pretty good at unloading our dishwasher, although if left unsupervised, he can leave all the glasses upside down on the edge of the sink.  Still, I find it helpful to have him contribute in this way and he never complains.  Other chores include taking out the trash and recycling, watering the plants in the front or back yard, brushing his teeth (not a chore but still works in the same way) or putting away clean clothes. 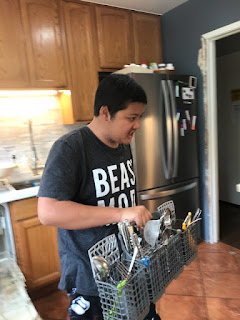 5)  Josh still loves to sniff Mama's hair.  Actually, he sniffs Hope's hair as well.  I think he really has a thing for long black hair.  Maybe blond hair doesn't smell as nice?  Alex has no hair on his head so he doesn't get to participate in this.  One time Hope had a friend over who had the most beautiful long black hair.  The girls were watching a movie when out of the corner of my eye I saw Josh headed over to sniff her hair.  It was like everything went into slow motion, Josh going in for a sniff, me trying to head it off saying, "Nooooooooooooooooo".  Disaster was averted but the friend seemed a little confused.  Anyways, sniffing people's hair is not the most prosocial behavior but it's one of the only ways that Josh initiates connection and affection.  And it makes him happy, which makes me happy.

The Bummer -- Yesterday Josh and I went for a walk to the "Little Free Library" down the street.  For those of you who have not seen these, they are little shelves or cupboards that people put up on their front yards where people can leave a book or take a book.  It tends to be a low key place where people sometimes congregate.  Three people from the same household were there already and as we approached, smiling Josh said in a loud and delighted voice, "F*cker!" Dude, I have no idea where he got that! Seriously, I don't think that I've heard that word in my house ever. (Other not nice words but not that particular one.)  I do know that Josh will pick up a word that he hears and rolls it around in his mind and mouth.  Last month his favorite word, unfortunately, was "abortion".  Oh how he loved to say that word.  Sometimes he'll keep saying it until we say it back to him.  It's the only way to get him to stop.  Well, all I know is that I haven't had a good mortification like that in a while.

Posted by showerheads and hairdryers at 2:47 PM