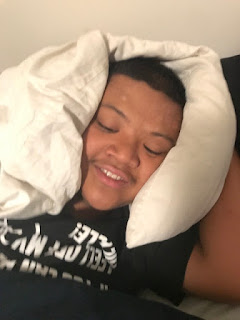 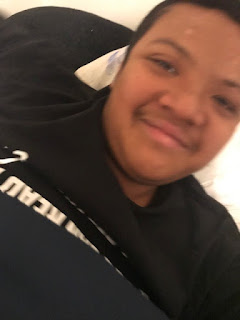 I have a seventeen year old son who wakes up happy on most mornings.  How's THAT for counting your blessings?  This is not to say that he's happy all the time.  When he's unhappy, you'll know it because he feels free to cry, yell and throw things.  But the kid loves to be alive most mornings.

For example, today is Saturday and, as we did not have anything going on in the morning, I slept in past our usual early morning family wake up time.  The first thing that I hear is the sound of jubilant clapping.  Joshua is drawing some of his favorite things on his magnadoodle toy (such as hairdryers and showerheads), putting the magnetic pen down and then clapping.  He can do this for hours.

Eventually he comes out to the kitchen and starts rummaging around for something to eat.  Without supervision his greatest interest, of course, is to find cookies.  Josh's sisters have been on a baking kick for quite a while now so he knows that they often hide containers full of baked goodies in various places in the kitchen, ostensibly to keep him from finding and eating them.  But, though he may have intellectual disability, he's not stupid so he can usually find any hidden sweets or baked goods.  Given further unsupervised time, he will eat the whole thing, leaving prodigious amounts of crumbs on the floor for our dog to clean up.

Alex even put a "baby proofing" clip on one cabinet in an attempt to keep Josh from accessing it but he figured out how to work it pretty quickly.  Finally, we ended up having to buy a plastic "lock box" to keep chips and granola bars in so that we could have some secure location in the kitchen.  Josh has not figured out how to open this yet but the problem is that the rest of us often forget to lock it up so Josh knows to check it first when he's hankering for a chocolate chip breakfast bar. 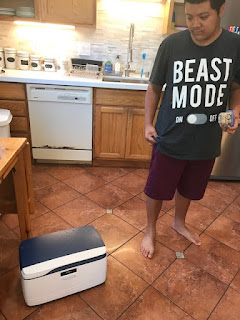 Hearing Josh in the kitchen is what finally got me out of bed.  I offered to make him some toast and he grinned broadly.

Josh also really enjoys what we call "frozen yogurt".  This is the leftovers of homemade fruit smoothies frozen into ice cube trays.  He won't eat it in liquid form but once frozen, he loves it.  He treats each cube like a little delectable piece of luxury, nibbling first on the edges then taking slightly larger bites, smiling as he does.

The house is really quiet this morning as Josh's sisters are away on a youth retreat.  I am listening to my son making happy noises while eating his breakfast.  Every once in a while, he will take a break from his voracious eating and express his joy through a few seconds of vigorous clapping.  I know that he might just be seeking sensory input.  But sometimes I imagine that Josh is giving thanks to God in his own way for his life.  And in my mind, I see God smiling back, very pleased at His son.

Posted by showerheads and hairdryers at 10:34 AM