The Red Vest and Hope for the Future 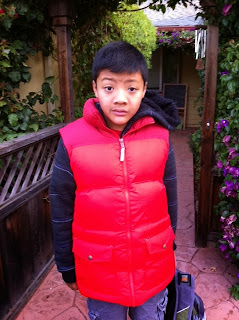 Have you ever reached a milestone and not even noticed it only to realize that you've been working toward getting there for a really, really long time?  I remember one day in college when I realized that I was no longer putting much of my day's energy into being insecure.  I just stopped in my tracks one day as I walking through "the quad" of my college campus and thought to myself, "Wow.  I used to be so consumed by negative thoughts about myself and now, I'm not . . . so much."  It's like I had been walking, walking, walking toward a certain direction and then when I got there, I turned around and realized that I had walked about five thousand miles.  Sometimes, you just have to stop and celebrate how far you've come.

Today is one of those days in my life of parenting Josh.  It was a normally chaotic school day morning.  Alex was entangled in some sort of high level conflict mediation with the girls so I picked up Daddy's usual mantle of getting Josh out the door to his bus.  I could hear the honk of the bus in front of our house and I thought of the line of cars that was probably beginning to grow behind the little yellow bus so I rushed to get Josh out the door.   Suddenly, I realized that I needed to put the field trip permission slip into Josh's backpack so I started barking orders to my usually very passive son.  "Josh, put your shoes on!  Josh, put on your red vest.  It's cold outside.  C'mon, go, go!  The bus is waiting!"

By the time, I got his permission slip ready to go, Josh had not only put on his shoes and vest, he had zipped it up and was dragging his backpack out toward the bus.  I took one look at him and was smacked in the head with a realization:  Josh had fastened and zipped up the zipper on his red vest all by himself for the first time ever!

You need to know that we have been working on his fine motor skills since he started physical and occupational therapy which was before he could even walk.  Due to low muscle tone and his visual impairment, learning to do every "normal" task whether opening a door to walking up stairs to putting on his underwear is a big project. We have to do a task analysis, get a strategy for training and practice it a million times.

Josh has been working on zippers and snaps and buttons for at least 8 years now to no avail.  Not only are these things very difficult for his clumsy little fingers, he's just not motivated to do them and (with his visual impairment) it's difficult for him to see little things like zippers well enough to manage them.  He doesn't care that "big boys" can do these things by themselves.  To this day, he just wiggles his jeans down when he needs to go to the bathroom rather than unsnapping and unzipping because he can't manage the snaps or buttons.

Honestly, I never thought he would be someone who could zip up his own jacket without help.  I just imagined a life of helping him with these things.  Yet here he was zipping up HIS VERY OWN VEST!  My mama-pride knew no bounds!  Despite the waiting school bus and the long line of waiting cars behind it, I could not resist taking a moment to snap this photo.  I almost wanted to go up to every car waiting behind that bus and tell each of them, "Hey guess what? My son zipped up his own vest today!"

Josh's sudden ability to zip up his own vest gives me immeasurable hope for the future.  If he can master this, maybe someday he can he could fully go number two all by himself, wiping and all!  The thought of saying to my son, "Hey Josh, go take a shower" and having him be able to do the whole thing by himself makes me giddy with joy!  Better yet, what if he could discern for himself that he needed a shower and then took responsibility for his own personal hygiene?  This is crazy but why not?

After all, despite long, long seasons of non-growth, suddenly things can change and people do move forward.  Sometimes it takes forever but anyone can learn and grow.  And when growth happens we have to mark it, celebrate it and take it as a gift of hope that there are more good things to come for the future.
Posted by showerheads and hairdryers at 12:50 PM