Minor Miracles and Other Things that Keep You Going 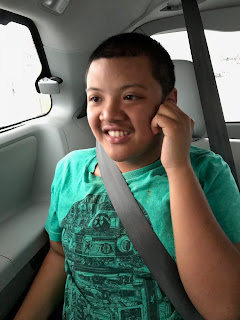 Being fifteen has meant that Josh is sometimes aggressive.  When he wants something but can't have it, he might grab, scratch and even hit people around him.  One time when we were in our van on our way home from a family vacation trip to SeaWorld, he suddenly got really frustrated and pulled a big handful of hair from his sleeping sister who was in the row in front of him.   That was a huge bummer.  It broke a lot of trust with that sister and she, understandably, declared that she was going to take a break from helping Josh.  The other sister, also understandably, defended him, declaring that he couldn't help it because he gets frustrated just like all of us but he doesn't have the tools to manage and express his emotions.

We've employed various strategies and behavior plans to deal with this unfortunate but somewhat expected pattern given Josh's age.  He's a teenager.  His brain is going through a normal adolescent growth process which includes hormonal and adrenaline surges.

One of the things that we do is to leave his presence and let him know that he doesn't get to be around us if he's being demanding or agitated.  Josh's wonderful respite provider, K, knew to do this the other day when Josh was becoming aggressively demanding. Apparently, Josh was yelling and grabbing K's arm.  K firmly told him that he was going to have to be in his room by himself for a while and that K was going to be in the living room.  K said that Josh yelled and made unhappy noises for a few minutes and then was quiet for about 15 minutes.

Josh came out to the living room and silently sat down next to K and then did something that shocked our experienced respite provider.  Josh said, "I'm sorry."

"It was a miracle!" K said as he recounted the experience to me later.  "You know, my colleagues and I talk about how we stay motivated for our work by the little miracles that we experience every once in a while.  This was one of them."

It's so true.  I know many adults who don't seem to know how to utter those words in the course of their lives.  How did Josh access those words and place them in a socially appropriate context?  Was he just repeating a phrase that he heard in a song or on the radio?  Maybe.  But it touched K's heart nevertheless.

As a Christian, I believe that being sorry and acknowledging one's faults/ shortcomings/ fallenness/ sins is a crucial part of opening one's heart to grace.  Yet I also know how difficult it is to speak those works of acknowledging wrong.  Sometimes my husband has to wait a good long time to receive an apology from me in a situation where we both know that I was wrong.

I know that apologizing not something that is modeled by many "adults" in this world but somehow, we all know that repentance is what makes healing and relationships possible.  Sometimes, an apology is a miracle; a sign of some amount of self-knowledge and a desire to heal.  It is a sign of grace and hope.  It is the touch of God.  What a beautiful thing to see that, in that moment with K, Josh had been given the gift of being able to say, "I'm sorry".

Posted by showerheads and hairdryers at 8:58 AM