A Fable about a Table

**Friends, this post is longer than my average post.  Please give yourself a few extra minutes to read.  To help you, I've put in more than the average number of photos.  Thanks for engaging with my life and my thoughts!


My husband tells me that his parents bought this table as a part of a big home redecorating project in the 70's.  That would explain how ugly the table was.  The legs to this table always made me think of furniture that might be in King Arthur's court; heavy, ornate and . . . medieval.  But it was also sturdy and free so we've had it in our dining room ever since Alex's dad passed away.  It is the only dining table that my kids had ever known. 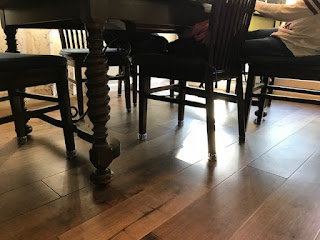 Alex has always taken care of this table as a precious artifact from his family history.  When we have to move the table, it must be done with two people so that it can be lifted not dragged.  Expanding the table by adding additional leaves to it must be done with great care and attention lest it be jostled too much and things get out of joint.  I never knew if this was because the table was so important to him or because he's just a really meticulous dude.  It might be both.

For a long time we had these custom made cushiony cover thingies on the table at all times.  I don't know why.  They came with the table so we kept them on.  And because they were ugly, we always had a table cloth on the table.  And because we had kids, the table cloth was always getting disgustingly gross so we washed the tablecloths almost every day.

Two years ago I asked myself why we were putting so much effort into protecting a table that was almost 50 years old and far from my ideal table.  I made a big change to our lifestyle and decided that we would let our table be naked, come what may.

Well, what came was that one day, while his mom was watering plants in the backyard, Josh took a ball point pen and carved a significant number of shower heads, hairdryers and fans into the table top where he sat to have an after school snack.   Here are some pictures of his "designs". 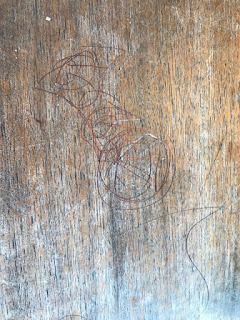 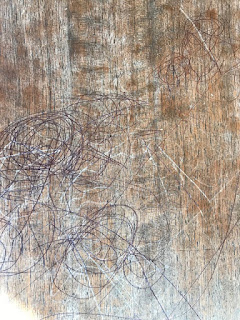 My first thought was that my husband was going to have a cow.  My second thought was that the table top was already pretty old and worn.  I posted some of these pictures on Facebook and a friend suggested that I simply refinish it.  Another friend even suggested a specific place nearby who might do a great job.  But given the busyness of my life and my tremendous hostility to taking on household projects, I knew that this would never happen.  I just internally prepared myself to live the rest of my life with a dining table with some artwork on it.  Maybe it would just be a conversation piece.  Or we just never let any non-family member sit where Josh usually sits.  I contemplated returning to table cloths.

Alex did have a cow, but just a little one.  He had a calf.  He was upset but quickly submitted to the chaotic power of Josh.  We have an autistic child.  Whaddya gonna do?  Fight to have a semblance of order in our lives?  I think not.

I'm not sure how it happened but somehow my husband and a good friend of his were chatting about what happened to the table.  The friend happened to be a designer and inventor who knew how to work with wood.  And he happened to have a power sander.  I kept coming home from work to see them working on the table with great gusto.  I think they were actually having fun.  Alex was really enjoying learning a new skill, something that he always wanted to know how to do but never had the time or bandwidth.

This is a picture of them and the table before the final varnish.  It was an amazing transformation and resurrection.  I couldn't believe it.  It was a gorgeous color of reddish brown; shiny, gleaming, almost radiating a loving warmth to our home. 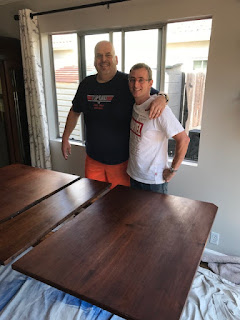 Here is a pic of the final work.  Beautiful, isn't it? 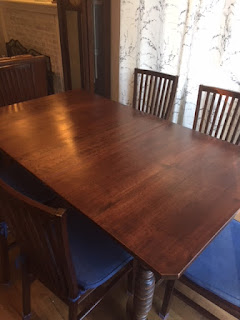 How I wish the story ended there but, alas, it does not because two nights ago, the girls had left a permanent marker on the other end of the table from where Josh sits.  As I was preparing his pills, in a split second Josh took the black permanent marker and did this. 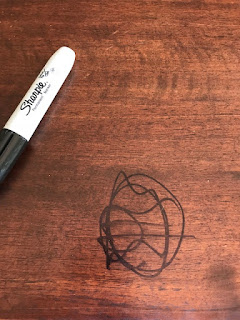 I turned around to see him holding the marker in his hand.

"Josh, what are you doing?"  he replied, calmly, eating a tomato.  If he sensed my emotion, he gave no indication.  It occurred to me that even our dog knows when he is in trouble.  Luther knows when to avert his eyes and get out of the way when I find that he's ripped up a stuffed animal or has peed on the carpet.  But my son acted like it was no big deal, like he was the one who knew some peaceful, deep wisdom that I could not yet fathom.  I just stood in the kitchen with my mouth open, silent, fuming and flummoxed.  Our beautiful, refinished table, was ruined once again.  After a few minutes of silence Josh said to me, "Want more toast".  Sigh.

Years ago, a wise mentor once taught us that we have to remember that the many things that we work to build in our lives are like sandcastles.  We work hard to build something and we want them to be beautiful, excellent, impactful, and lasting.  But in the end, like sand castles, the things we build are ultimately washed away.  Organizations, churches, ministries, institutions, programs, careers, wonderful as they may be, they all have their ends, often sooner than we expect.  Even expensive dining tables don't last forever.  None of the things in my house will last forever.  Even my house will not last forever.  From a Christian perspective, the only things that lasts forever are people and God (and maybe animals, I'm not sure about that one yet).

A few weeks ago while we were on vacation at the beach, we ran into a pair of brothers who were hard at work on a super-duper sand castle.  They had roped off a section of the beach and were building a replica of an actual European castle that they had researched.  Both were engineers who grew up at the beach making sand creations in their childhood. They spent quality  time together once a year by spending a whole day making something beautiful out of sand.  This project took them over 13 hours.  They arrived with their many tools and buckets before dawn and we helped them pack everything up using our flashlights on our phones.  As we chatted at the end of the day, I asked them why they did this and wasn't it a bummer that their creation would be washed away by the next morning?  Exhausted but happy, they said that it's all part of the process.  They did not expect it to last forever.  That was not the point.  Their wives let them take a whole Saturday away from their families not to build the sandcastle but to invest in their relationship as brothers.

I've been thinking about this sandcastle ever since that day.  The beautiful, valuable things in our lives are but a reflection of that which is ultimately lasting beauty.  We will enjoy our lives, our relationships and even our things better if we accept that and just give ourselves to the process of life in this temporal world. 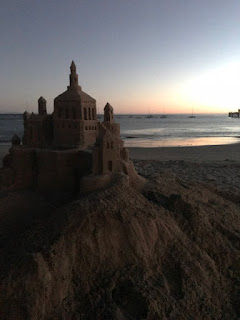 Posted by showerheads and hairdryers at 12:07 PM